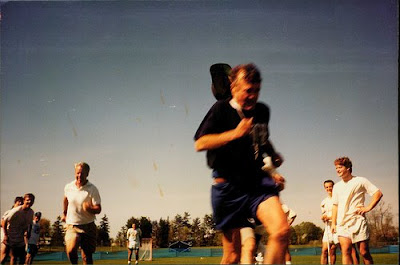 I learned today from the Middlebury College twitterer that Lacrosse Legend Peter Kohn died. I am posting links to several articles about this wonderful person, and my heart is heavy thinking about him. I agree wholeheartedly with Middlebury College Director of Athletics Erin Quinn who said, “Our world just lost one of its kindest souls, leaving us with the responsibility of carrying on his legacy of kindness and humility.”

The above picture shows Peter sprinting in 1991 against Jim Grube, who was the head coach at the time (found on Peter Kohn's flickr account)

I grew up in Middlebury, Vermont, where Peter Kohn spent a good deal of his life working at Middlebury College and I was a total lacrosse junky. I watched my first lacrosse game at the college field and I was lucky to be on the Middlebury Union High School's first team when I was a freshman in High School. I was an avid fan of the game as well, and got to know something of Peter's work as a manager, as a morale-booster, and as a wise guide of the members of Middlebury's lacrosse teams. He also had a role in many other lacrosse teams, All Star Games, World Championships, and summer league teams. Later, he served other teams at Middlebury College as well. 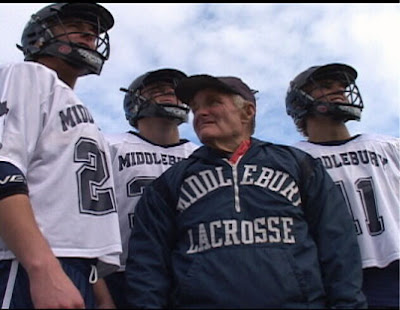 During my senior year at Bates College, we played Middlebury in a lopsided affair, coming up short against the juggernaut that was (and is) Middlebury College Lacrosse. I remember Peter Kohn well, as he cared for his team, and was also gracious, helpful and kind to those of us on the opposing side. Later that spring, I played in a New England All-Star game at MIT and I was pleased to see that Peter Kohn was serving as manager of my team. His wonderful humanity and kindness shined through back in 1991 and hopefully will continue to shine amidst all those who he was able to touch in his rich life. Tonight, while Googling Peter, I found the picture below in which you can see Peter on the left, and also me on the right. I didn't know the picture existed, but was blessed to find it on PETER's (!) flickr page. I was blessed to be able to know him just a bit, and I pray that he rest in peace and rise in glory and may all those who remember him in these days feel blessed to have known him. 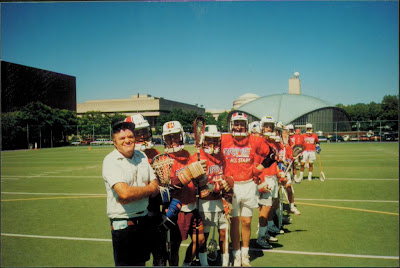 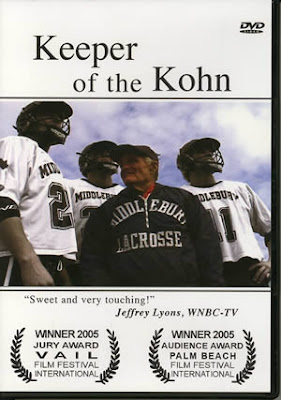 Keeper of the Kohn, an intimate look at an icon in the lacrosse world: Peter Kohn, the longtime field manager of the Middlebury College lacrosse team. But this isn’t a story about collegiate lacrosse — though Middlebury does go to the national championships in the course of the film. Instead, it’s the story of a simple man whose loyal friendship and love for the sport provided him with a family, a home and a sense of purpose. Along the way, Kohn made an impression on dozens of athletes, to whom he passed along important lessons about humility, patience and kindness.

Watch it HERE on Hulu 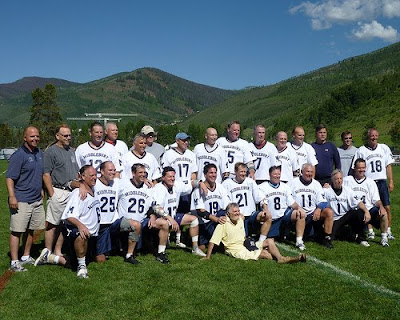 Beloved lacrosse manager and longtime Middlebury College friend, Myron G. “Peter” Kohn passed away on Aug. 5 at University of Pennsylvania Hospital in Philadelphia, Pa. The lacrosse legend was unable to recover from a heart attack he suffered on a fishing trip near his home in Cape May, N.J., on Aug. 1.

“Our world just lost one of its kindest souls, leaving us with the responsibility of carrying on his legacy of kindness and humility,” said Middlebury College Director of Athletics Erin Quinn.

Peter Kohn was one of the most beloved and unique figures in the lacrosse world. For more than 50 years he was connected to the sport. The subject of a much-publicized documentary, “Keeper Of The Kohn,” he started as a field manager for the Park School in Baltimore in 1954. He was manager of the U.S. teams from 1978 to 1998, for the North-South All-Star game for over 25 years and for club teams in the United States Club Lacrosse Association for over 20 years. Kohn worked in the equipment room at Middlebury from 1981-1988, while serving as a manager of the men’s lacrosse team. He later began to spend his winters in Florida and returned to campus each spring to work with the team. When time permitted, Kohn also enjoyed helping out with other spring teams at Middlebury as well as teams during his brief visits in the fall and winter. Kohn is well-known throughout the lacrosse world, having served as manager of the U.S. National Team several times at the World Games.

The Middlebury lacrosse field manager failed to recover after a heart attack on Aug. 1 that hospitalized him.

Kohn - part of the Middlebury family for over two decades - left an indelible impression upon those he met and inspired. Before arriving at the College in 1981, Kohn spent years mentoring teams and players at every level of the game. He managed six world teams and 32 all-star games, became known for his generous spirit and tireless loyalty and demonstrated a passion for lacrosse that touched generations of players. Today, the women's field-hockey and lacrosse field bears his name.

"He was the heart and soul of the lacrosse program," said women's lacrosse tri-captain Blair Bowie '09. "You could meet any alumnus from the past 40 years of Middlebury lacrosse and talk to her for hours and hours about Peter; he brought people together like that. Essentially, he represented the epitome of pure love of sport for no other reason than the joy of playing."

Kohn maintained a subtle but powerful presence throughout the lacrosse world. His far-reaching contributions to the sport were formally commended in 2004 when he was inducted into the National Lacrosse Hall of Fame. Despite receiving numerous accolades and widespread recognition for his outstanding role in the lacrosse community, Kohn remained humble, genuine and focused on his players.

Read it all HERE
Posted by Peter Carey on Wednesday, August 05, 2009