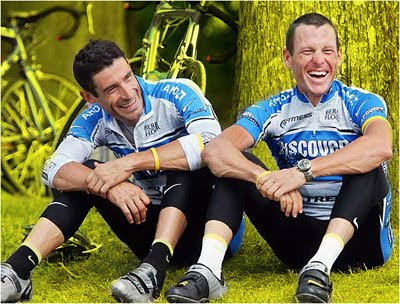 Can't help but look forward to "big" George Hincapie and Lance Armstrong riding together again...I know that Lance's time may have passed in terms of being the very top of the sport, but it is fun to watch anyway! And, George Hincapie is one of my favorite riders...he's a great teammate, a "Grand Domestique!"

Lance Armstrong intends to build Team RadioShack around an experienced base of riders.

from The Guardian, read it all HERE

Lance Armstrong has confirmed that he is to reunite with his friend and former team-mate George Hincapie in Team RadioShack in 2010.

Hincapie is currently riding for Team Columbia-HTC and was a strong influence when he helped Armstrong secure his seven Tour de France victories while riding for Team US Postal Service and Team Discovery Channel. "He's already committed. Has been since before we got our funding," Armstrong told Outside Magazine.

Armstrong intends to build his new Team RadioShack – or The Shack as it will be known – around a solid base of riders well-known to him, such as his friend Levi Leipheimer, Hincapie, Chris Horner and Andreas Klöden. Armstrong's impressive network is sure to open doors to additional powerful riders.

read it all HERE