The Church is the only society that exists for the benefit of those who are not its members. 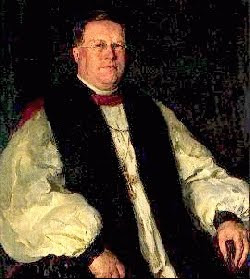 
Temple's admirers have called him "a philosopher, theologian, social teacher, educational reformer, and the leader of the ecumenical movement of his generation," "the most significant Anglican churchman of the twentieth century," "the most renowned Primate in the Church of England since the English Reformation," "Anglican's most creative and comprehensive contribution to the theological enterprise of the West." One of his biographers lists him (along with Richard Hooker, Joseph Butler, and Frederick Denison Maurice) as one of the Four Great Doctors of the Anglican Communion.
Ronald Knox described him thus:


A man so broad, to some he seem'd to be
Not one, but all Mankind in Effigy.
Who, brisk in Term, a Whirlwind in the Long,
Did everything by turns, and nothing wrong.
Bill'd at each Lecture-Hall from Thames to Tyne,
As Thinker, Usher, Statesman, or Divine.


George Bernard Shaw called him, "a realized impossibility."
Who was this remarkable person?

William Temple, 98th Archbishop of Canterbury, was born in 1881, the second son of Frederick Temple (born 1821, priest 1847, headmaster of Rugby 1857, Bishop of Exeter 1869, Bishop of London 1884, Archbishop of Canterbury 1897, died 1902). At the age of two, he had the first attack of the gout that would be with him throughout life and eventually kill him. His eyesight was bad, and a cataract, present from infancy, left him completely blind in the right eye when he was 40. However, he was an avid reader, with a near-photographic memory, and once he had read a book, it was his. He was a passionate lover of the music of Bach. In literature, his special enthusiasms were poetry (Browning and Shelley), drama (the Greeks and Shakespeare), and a few novels, especially The Brothers Karamazov. He believed that theological ideas were often explored most effectively by writers who were not explicitly writing theology.