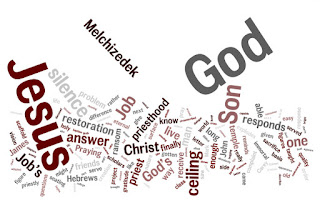 While in Italy during college, I had the amazing fortune to take a class on Michelangelo taught by one of the main scholars of the Florentine genius. One of a dozen or so highlights of the class was when we were given a private tour of the Sistine Chapel. When I was there, the restoration project was going on and part of the ceiling was covered by a mechanized scaffold in the middle of the ceiling while on one side there was a rather dark and subdued depiction of the Biblical scenes. On the other side of the scaffold, the ceiling glowed with bright color, the figures seemed to pop off the ceiling as if they were sculptures rather than painting. The paintings were a wonder to be seen, and most scholarship on the ceiling had to be revised after experts saw the results of the wonderful (albeit controversial) restoration project.

This theme of restoration moves through our readings today.

Job’s problem looks easy enough to figure out, on the surface, he’s gotten whacked, smacked, and rejected. He’s a blessed man, a man of integrity, and yet he’s gotten beat up. He is angry, and rightfully so. After first responding to his wife (which we discussed two weeks ago) by saying, “should we receive the good at the hand of God and not receive the bad,” he then goes into a long dialogue within himself, with his friends, and finally with God. Job’s problem seems easy enough to figure out, on the surface, but in reality, his problem is that he’s seeing things all wrong. So God responds to him. God speaks from the whirlwind and says that he will answer Job’s questions if Job can prove his worthiness.

Email ThisBlogThis!Share to TwitterShare to FacebookShare to Pinterest
Labels: 18 October 2009, My sermons