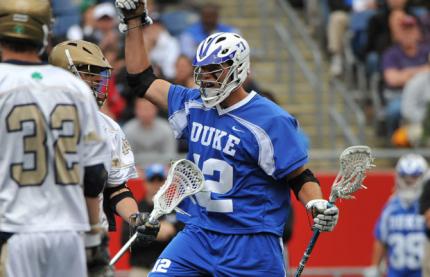 Duke defeats Notre Dame in Quarterfinals in Men's Lacrosse
Duke sophomore goaltender Dan Wigrizer made 14 saves to anchor the sixth-ranked Blue Devils to a 7-5 victory over fifth-ranked Notre Dame in front of 14,122 fans at the NCAA men's lacrosse quarterfinals at Gillette Stadium. Duke advances to the championship weekend for the fifth straight season and for the seventh time overall.Duke (14-5) will play unseeded Maryland on May 28 at M&T Bank Stadium at 6:30 p.m. on ESPN2. It will be the third meeting between the two squads this season.

Photos of the game are by Ben and James Mackey.
“This is the fourth time I've played Notre Dame,” Wigrizer said.” I'm kind of used to it. Already the fourth time in two years with an out of conference team, which is an incredible amount of games. I was just excited to play them, I knew they were going to come out shooting. They were going to start taking shots right away, which they did. The first possession they had, they just kept shooting and shooting. Unlike last year, when they had 10 total shots on goal in the championship game, they got a lot of shots on goal today and I was just ready and prepared to be seeing shots the entire day and I just wanted to stay calm and relaxed and just let the shots come from them.”