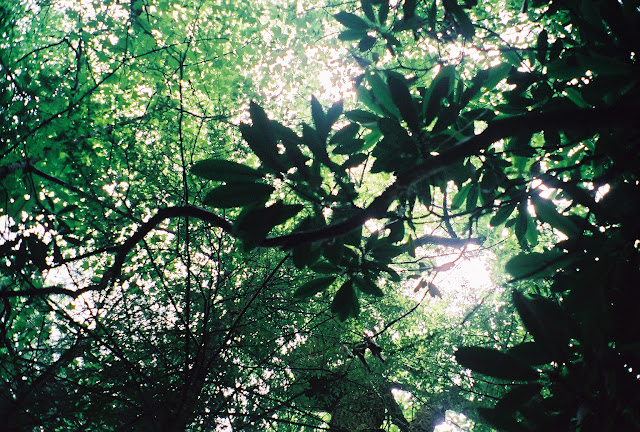 
The Friendly Forest
Once upon a time in the Friendly Forest there lived a lamb who loved to graze and frolic about. One day a tiger came to the forest and said to the animals, "I would like to live among you." There were delighted. For, unlike some of the other forests, they had no tiger in their woods. The lamb, however, had some apprehensions, which, being a lamb, she sheepishly expressed to her freinds. But, said they, "Do not worry, we will talk to the tiger and explain that one of the conditions for living in this forest is that you must also let the other animals live in the forest."

So the lamb went about her life as usual. But it was not long before the tiger began to growl and make threatening gestures and menacing motions. Each time the frightened lamb went to her friends and said, "It is very uncomfortable for me here in the forest." But her friends reassured her, "Do not worry; that's just the way tigers behave."

Every day, as she went about her life, the lamb tried to remember this advice, hoping that the tiger would find someone else to growl at. And it is probably correct to say that the tiger did not really spend all or even most of its time stalking the lamb. Still, the lamb found it increasingly difficult to remove the tiger from her thoughts. Sometimes she would just catch it out of the corner of her eye, but that seemed enough to disconcert her for the day, even if the cat were asleep. Soon the lamb found that she was actually looking for the tiger. Sometimes days or even weeks went by between its intrusive actions, yet, somehow, the tiger had succeeded in always being there. Eventually the tiger's existence became a part of the lamb's existence. When she tried to explain this to her friends, however, they pointed out that no harm had really befallen her and tha perhaps she was just being too sensitive.

So the lamb again tried to put the tiger out of her mind. "Why," she said to herself, "should I let my relationship with just one member of the forest ruin my relationships with all the others?" But every now and then, usually when she was least prepared, the tiger would give her another start.

Finally the lamb could not take it anymore. She decided that, much as she loved the forest and her friends, more than she had ever loved any other forest or friends, the cost was too great. So she went to the other animals in the woods and said good-bye.

Her friends would not hear of it, "This is silly," they said, "Nothing has happened. You are still in one piece. You must remember that a tiger is a tiger." they repeated. "Surely this is the nicest forest in the world. We really like you very much. We would be very sad if you left." (Though it must be admitted that several of the animals were wondering what the lamb might be doing to contribute to the tiger's aggressiveness.)

Then said two of the animals in the Friendly Forest, "Surely this whole thing can be worked out. We're all reasonable here. Stay calm. There is probably just some misunderstanding that can easily be resolved if we all sit down together and communicate." The lamb, however, had several misgivings about such a meeting. First of all, if her friends had explained away the tiger's behavior by saying it was simply a tiger's nature to behave that way, why did they now think that as a result of communicaiton the tiger would be able to change that nature? Second, thought the lamb, such meetings, well intentioned as they might be, usually try to resolve problems through compromise. Now, while the tiger might agree to growl less, and indeed might suceed in reducing some of its agrgessive behavior, what would she, the lamb, be expected to give up in return? Be more accepting of the tiger's growling? There was something wrong, thought the lamb, with the notion that an agreement is equal if the invasive creature agrees to be less invasive and the invaded one agrees to tolerate some invasivenss. She tried to explain this to her friends but, being reasonable animals, they assured her that the important thing was to keep communicating. Perhaps the tiger didn't understand the ways of the lamb. "Don't be so sheepish," they said. "Speak up strongly when it does these things."

Though one of the less subtle animals in the forest, more uncouth in expression and unconcerned about just who remained, was overheard to remark, "I never heard of anything so ridiculous. If you want a lamb and a tiger to live in the same forest, you don't try to make them communicate. You cage the bloody tiger."
Posted by Peter Carey on Tuesday, May 17, 2011