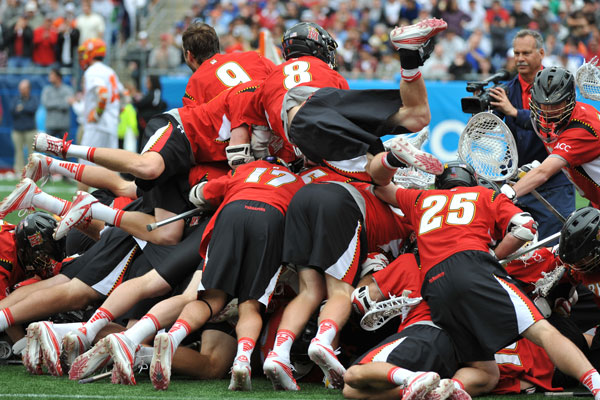 Senior Grant Catalino scored with a low-to-high rocket from the right wing with 0:32 left in the first overtime to give the University of Maryland men's lacrosse team a 6-5 victory over No. 1 seed Syracuse in front of 14,122 Sunday afternoon at Gillette Stadium.
The victory gives the Terps a 12-4 overall record this season and sends them to their first Final Four since 2006.
The overtime period started with sophomore Curtis Holmes winning his 11th face-off of the game on a big groundball by senior Dane Burns. But the Terps couldn't get the game-winner on that possession and the Orange had a chance for the win with just under 2:00 to go in OT.
Syracuse's Kevin Drew scooped up a loose ball and carried it into the Maryland zone. Drew dodged down the right alley on the transition chance, but his shot sailed right of the goal and the Orange failed to back-up the shot, giving possession pack to the Terps.
More HERE at "Inside Lacrosse"
Posted by Peter Carey on Sunday, May 22, 2011