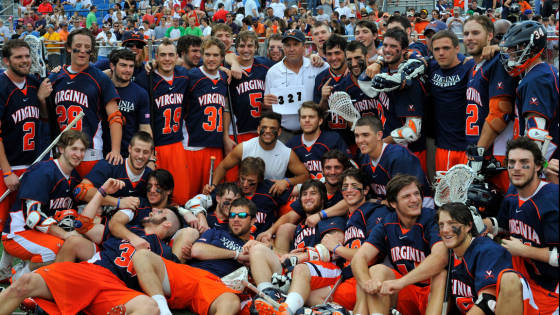 Junior attackman Steele Stanwick (Baltimore, Md.) had three goals and four assists, including a goal and four assists during a 7-0 second quarter, as seventh-seeded Virginia upset second-seeded Cornell 13-9 in the quarterfinals of the NCAA Division I Men's Lacrosse Tournament on Saturday afternoon at James M. Shuart Stadium on the campus of Hofstra University.
With the win, Virginia improves to 11-5 and advances to the NCAA Final Four on May 28-30 at M&T Bank Stadium in Baltimore, Maryland against the winner of Saturday's second quarterfinal between Johns Hopkins and Denver. Cornell ends its season at 14-3 with the loss, while seeing its 11-game winning streak snapped.
Check out the story at "Inside Lacrosse" HERE
Posted by Peter Carey on Saturday, May 21, 2011