Article on our ordination in Richmond Paper... 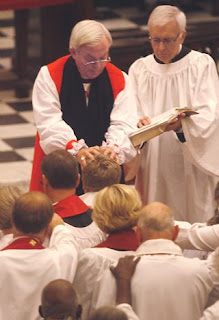 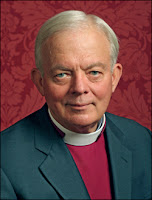 A year after 15 congregations left the Episcopal Diocese of Virginia, taking 25 priests with them, the diocese is celebrating the ordination of 16 new priests.

The priests were ordained in three separate services this week. They made up the largest class to be ordained from the diocese since the Rt. Rev. Peter James Lee became bishop in 1985. They will join the 450 priests in the Virginia diocese, which has had a net gain of 100 priests under Lee's leadership.

"We have a vibrant group of new priests in the last 48 hours," Lee said to applause from the congregation that packed St. James's Episcopal Church on West Franklin Street in Richmond for Tuesday night's ordination service for five priests.

Four other priests were ordained Sunday at Grace Church in Kilmarnock by the Rt. Rev. Shannon Sherwood Johnston. It was his first ordination since becoming bishop coadjutor in May. Seven more were ordained Monday at Church of the Good Shepherd in Burke by the Rt. Rev. David Colin Jones, suffragan bishop.

After the service, Lee said he felt very encouraged.

At the same time that the diocese is celebrating the ordination of new priests, it is involved in a court fight over ownership of church property with 11 of 15 conservative congregations that pulled out of the denomination a year ago. The churches that left were upset about the national church's approval of an openly gay man for ordination as a bishop and other matters. A Fairfax County Circuit Court judge heard arguments in the case during a five-day trial in November but has not issued a ruling.

During Tuesday's service, the ordinands promised to obey their bishop and others with authority over them and affirmed their belief in the Old and New Testaments as the word of God. They also promised to love and serve the people with whom they would work, to preach and to declare God's forgiveness. They acknowledged a belief that they had been called by God to the priesthood.

Presbyterian layman E. Carson Brisson, associate professor of biblical languages, and associate dean for academic programs at Union Theological Seminary and Presbyterian School for Christian Education in North Richmond, gave the sermon. He had taught some of the ordinands in seminary and they invited him to preach, said Louise "Weezie" Blanchard, a newly ordained priest who is associate rector at St. Stephen's Episcopal Church on Grove Avenue.

Brisson likened the new priests to a Bedouin shepherd who took her 15 sheep one at a time across a rain-swollen creek. Once the flock was safely on the other side, the shepherd spoke to each one by name. Brisson quoted Jesus' words: "I am the good shepherd because my father wants me to love my sheep, and that's what I do."

For Whitney Bland Zimmerman, who was ordained Tuesday and is associate rector at St. James's, Brisson's message was clear. "You love first. Everything else is second," she said.

Being ordained makes Zimmerman feel "deeply engaged in the community in a way that is so intimate that it's hard to describe," she said. The service is a reminder to her that her role is about serving God, not about herself, she added.

This week's ordination was the second for the priests. They were ordained deacons last summer. Deacons serve six months to a year in servant ministry, meaning they keep the church informed about the needs of the world. That is a reminder to the priests that their ordination is rooted in servanthood.

Johnston, who will succeed Lee as diocesan bishop when Lee retires, attributed the size of the ordination class "to the sense of commitment to mission that is very much alive in Virginia."

He added: "The Episcopal Church is an exciting church, a church that has a lot of attractiveness to people because of its history. Young people are responding to that."

The church is also "very tolerant of broadly diverse points of view. . . . I think questions that are so pressing in our society are being addressed by the church in a way that cannot be addressed in other discourses," Johnston said. "I'm encountering and experiencing the church in Virginia as being extraordinarily vibrant." 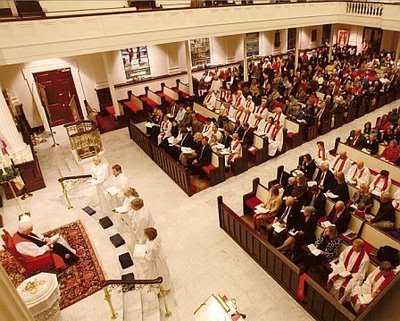