Corey Harris: Blues at the crossroads

I graduated from Bates with blues musician Corey Harris and his is a career well-worth following. He was recently named a McArthur "Genius" Grant recipient. This is an article on Harris in the Richmond (VA) Times-Dispatch from today. A excerpt is below, read the entire article here. 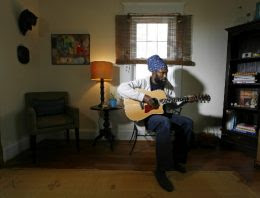 Blues at the crossroads
'Genius' grant recipient is knee-deep in a career that is certain to leave a legacy
Sunday, Dec 02, 2007 - 12:03 AM
By MELISSA RUGGIERI
TIMES-DISPATCH STAFF WRITER

CHARLOTTESVILLE Beneath the unassuming exterior of Corey Harris beats the heart of a musical genius.

At least the John D. and Catherine T. MacArthur Foundation thinks so.

In September, the foundation chose Harris as one of 24 people nationwide to receive a $500,000 "genius" grant from its Fellows Program, distributed over five years and to be used in any capacity. Others on the list range from a spider silk biologist from California to a neuroroboticist from Seattle to a water-quality engineer at Virginia Tech.

Mention the accomplishment to Charlottesville-based blues and reggae musician Harris, though, and he merely smiles -- proud, yet very humble.

He will likely never know who discovered and nominated him -- it's a secret process. His initial $100,000 will arrive next month, he said, and he's already thinking about long-term uses for the money.

"There is some research that I want to do, specifically in Ethiopia and Guinea. They're both places I've been to, and my goal is to eventually have a small place where I can not only learn music for myself, but invite people over . . . not for me to teach them, but for them to have a place where they can stay and be taught from people from that area," Harris said on a recent afternoon, sitting against a window in his small, neat living room.

Music, family and traveling are the touchstones of Harris' life. He doesn't watch TV, mostly because it bores him ("I'd rather read a book or listen to music," he said), but also because of a schedule that keeps him racking up worldwide frequent-flier miles.

His music -- an organic amalgamation of Delta blues, roots and reggae -- is greatly inspired by his travels. Last week, Harris jetted to Australia for three days to participate in the Adelaide International Guitar Festival. The past couple of years have included jaunts to Morocco, Sierra Leone and Ethiopia. In 2008, Switzerland, France, Spain and Turkey are all on the itinerary of places to perform.

But his more exotic forays are the ones that truly shape his songs.

Harris, who was born in Colorado and educated at Bates College in Maine, made his first trip to Africa in 1990, when he spent three months in Cameroon, later returning there and to Equatorial Guinea the next year for 10 months. He then landed in Louisiana for a few years, where he taught middle school French (he's fluent) and English.