The "Other" - Michael Battle and Ubuntu 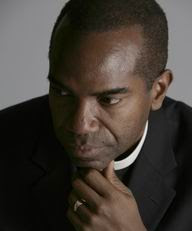 "Michael Battle is Priest in Charge at the Church of Saviour Episcopal Parish and Canon Theologian in the Episcopal Diocese of Los Angeles. A well-known writer, speaker and retreat leader, his ministry covers the globe and focuses on Christian non-violence, human spirituality, and African Church studies.

It is obvious to most people outside of the western world that we need a community in which to be human. The African concept of Ubuntu accentuates this worldview even more. Ubuntu is best described through the proverb: I am because we are; and because we are, I am. To know our individual identity is dependent upon community. In short, you cannot know you are intelligent, beautiful, linguistic, etc. without a community to make use of these gifts. Again, for a western person, this worldview is difficult to stomach. Such dependence of the individual upon the community smacks of “co-dependency” or weakness.

To complicate things further, if technology continues down its normal course for western persons, individuals will obtain extraordinary capacities to control personal environments without the reference point of knowing their impact on others. Such extraordinary resources then place us in the peril to either destroy us all or heal us all. We (western people) have not really gotten to know other cultures and people of the global south; after all, (we think to ourselves) they all really want to be in our countries.

This way of thinking prevents mutuality and the great African gift of community that we can learn from other cultures. This great gift is the keen perspective of seeing how self identity forms through a community. The natural question in the western world circles back around: Why is the African concept of community such a great gift?

Ubuntu is a great gift because it deepens our spirituality. Ubuntu (pronounced m-boon-too) is a word from the Bantu language of Africa, which roughly translated means “humanity.” It carries with it the concept that in order to be fully human, one must be in community: “I am because we are.” No one can be human alone. In a Christian worldview—one captured and transformed by the work of Archbishop Desmond Tutu in the face of the evils of apartheid in South Africa—this means that reconciliation is central to the concept because the world on its own tends toward division and individualism.

Unfortunately, persons of faith are also very much complicit in perpetuating division. Ubuntu invites us into a way of seeing how persons with cultural, religious and spiritual sensibilities can heal brokenness rather than make matters worse as an aggregate of individuals, cultures and nations. Ubuntu helps us see how we all (religious and non religious) are inextricably linked together—whether we like it or not. This way of seeing is obvious to African people who have built into their worldview that no one can survive alone. They have learned this through the many obstacles still present on the African continent.

What is not so obvious is how communal ways of knowing are lacking these days in the western world. For an African person, self-identity forms through communal practices and rites of passage. Ubuntu helps us both see this paradox (individuality through community) and inspires us to move toward deeper understandings of humanity (and God) in which we develop better self awareness through friendship and community.

And so, I am deeply grateful to our President of the House of Deputies, Dr. Bonnie Anderson, for facilitating the means for how Ubuntu will be our next theme for General Convention and subsequent years for our Episcopal Church."

Email ThisBlogThis!Share to TwitterShare to FacebookShare to Pinterest
Labels: Michael Battle, The Other, Ubuntu