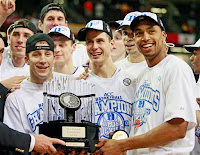 Coaches often say, "There is no I in TEAM," and in this NYTimes article, the concept of "servant leadership" and "putting the team first" take on a new incarnation in Duke Basketball's Greg Paulus:

ATLANTA — Against Florida State here Sunday in the Atlantic Coast Conference championship game, Duke Coach Mike Krzyzewski summoned point guard Greg Paulus from his bench. Paulus jumped up as if he had been sitting on a pile of red ants and was ready to rush into the game. Against Maryland the night before, Paulus could have knocked down a wall hustling to the scorer’s table to check in late in the first half.