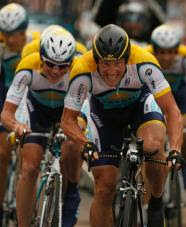 By ANDREW DAMPF – 2 hours ago

Armstrong, recovering from a broken collarbone, made his debut in the race.

British sprinter Mark Cavendish crossed the line first for Columbia High Road and took the first leader's pink jersey. Columbia finished the 12.7-mile route along Venice's beach front in 21 minutes, 50 seconds. Garmin-Slipstream was six seconds back and Astana was 13 seconds behind the leader.

Armstrong crossed the line first for Astana, and he is 15th in the overall standings.

"I felt all right for an old man," the 37-year-old Armstrong, a seven-time Tour de France champion. "Yeah, I think we're pleased with that, considering the amount of preparation we put into it, which was minimal but as much as we could.

"And those guys are specialists and Columbia focused on getting the pink jersey for Cavendish and maintaining it for a couple of days before the Dolomites. All in all we have to be very pleased."

The American returned to competition this season after 3 1/2 years of retirement. He broke his collarbone in a cycling crash in March. Armstrong took turns at the front with Levi Leipheimer and Janez Brajkovic, Astana's other time-trial specialists.

Columbia and Garmin don't have any aspirations for overall victory. While Armstrong has said he doesn't expect to win, he and teammate Levi Leipheimer are higher up in the standings than any other pre-race favorites.

Pre-race favorite Ivan Basso is 27 seconds behind Armstrong and Leipheimer with his Liquigas team placing eighth.

"I know they're behind us, but it's a long race and those boys know what they're doing," Armstrong said. "They have their moments picked out."

How can a team getting THIRD place be the headline? Two US Teams finished ahead of Astana. High Road is the top team in the world right now. Garmin was the defending champion of the Giro TTT. But no, the headline is about the team with Lance. I admire his talent, and have gone out of my way to see him ride, but his day has passed. Sorry, just find lopsided coverage of my favorite sport maddening!

Well, as you know, newspapers are there to make moola, and not many have heard of High Road, and think that Garmin is what is stuck to their windshield...

...I heard that twice the number of reporters are at the Giro this year than last, folks (who, like me, are not as hard-core cycling fans as you!) are hankering for a comeback story

Most sports coverage tend to find a star or two to focus on - Kobe, Lebron, Brett Favre, Hulk Hogan...and run with it. But I understand your frustration.