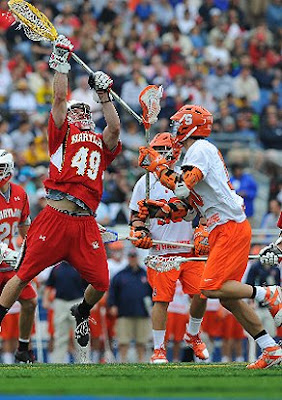 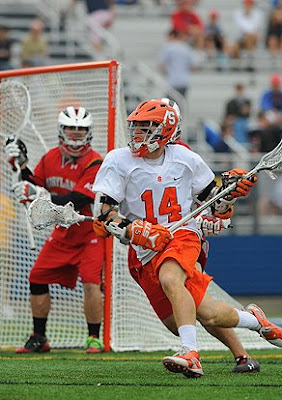 Syracuse tops Maryland 11-6 to gain lacrosse semi
HEMPSTEAD, N.Y. (AP) — Defending national champion Syracuse has advanced to the NCAA men's lacrosse semifinals, defeating unseeded Maryland 11-6 on Saturday.
Kenny Nims, Stephen Keogh and Dan Hardy scored two goals apiece for the second-seeded Orange (14-2).
Grant Catalino and Jeremy Sieverts led Maryland (10-7) with two goals apiece at Hofstra's Shuart Stadium.
Syracuse jumped out to a 4-0 lead 1:50 into the second quarter. The Terrapins cut it to 5-3 by halftime, but the Orange pulled away in the final four minutes of the third quarter, scoring three straight goals to go up 9-4.
Syracuse will play next Saturday at Gillette Stadium in Foxborough, Mass., against the winner of the quarterfinal between No. 3 Duke and No. 6 North Carolina in Annapolis, Md.

#2 Syracuse Pulls Away From Maryland to Reach Final Four

Hempstead, NY * The second-seeded Syracuse Men's Lacrosse team broke open a close game with five unanswered goals in the second half as it captured an 11-6 win over Maryland on Saturday afternoon in the NCAA Division I Men's Lacrosse quarterfinals at James M. Shuart Stadium on the campus of Hofstra University.

Syracuse improves to 14-2 and moves on to the NCAA semifinals next weekend at Gillette Stadium in Foxboro, Massachusetts, against the winner of tomorrow's Duke-North Carolina game. The Orange also extended its streak to 25 straight victories in NCAA quarterfinal games. Maryland ends its season at 10-7 with the loss.

Syracuse got on the board first 5:15 into the game as senior attackman Kenny Nims (Watertown, NY/Watertown HS) came around from behind the cage and beat Maryland goalie Brian Phipps (Annapolis, MD/Severn HS) from a sharp angle. Nims then fed sophomore midfielder Josh Amidon (Lafayette, NY/Lafayette) with 5:17 left in the first quarter, stretching the Orange lead to 2-0.

Maryland's hopes were dealt a blow with 1:02 left in the first quarter, when Phipps went down with a leg injury after jumping to try to stop a high shot from Syracuse before being replaced by senior Jason Carter (Crownsville, MD/St. Mary's). Seconds later, Syracuse midfielder Dan Hardy (Tully, NY/Tully Central HS) scored from in close off a feed from senior midfielder Matt Abbott (Syracuse, NY/Nottingham HS) to stretch the lead to 3-0 with 43 seconds left in the first quarter.

Syracuse extended its lead to 4-0 with 13:10 left in the second quarter when junior attackman Cody Jamieson (Six Nations, Ontario/Hagersville Secondary) converted in front of the cage. Senior midfielder Jeremy Sieverts (Lutherville, MD/McDonogh HS) finally got the Terrapins on the board with 10:15 left in the second quarter, beating Cavalieri from 15 yards out, cutting the Orange lead to 4-1. Maryland then trimmed the lead to 4-2 with 8:41 left, as sophomore attackman Grant Catalino (Webster, NY/Webster Schroeder HS) scored from a sharp angle to the left of the cage.

Syracuse ended the brief Maryland run with 4:59 left in the half, as Nims scored his second goal. Abbott set the play up when he fought off a pair of Maryland defenders for a loose ball on the ground 30 yards from goal and rolled a pass to Mims, who was completely unmarked in front of the cage. Maryland trimmed the lead to 5-3 with 1:27 left in the half, as freshman attackman Joe Cummings (Towson, MD/Loyola Blakefield HS) scored a man-up goal from the left side of the cage.

Neither team generated much offensively to start the second half, until Syracuse sophomore attack Stephen Keogh (Toronto, Ontario/Malvern Collegiate Institute) bounced a shot from in front of the cage over Carter's left shoulder with 5:22 left in the third to push the lead to 6-3. Maryland answered quickly, as Catalino scored his second goal of the game with 4:10 left to bring the Terrapins back within 6-4.

However, Syracuse scored the next five goals to put the game away. Senior midfielder Pat Perritt (Holtsville, NY/Sachem HS) started the run with a diving shot in front with 3:17 left and stretch the lead to 7-4. Keogh then scored again from 10 yards out as he was fighting off a Terrapin defender with 2:16 left to make the score 8-4, and Hardy scored from 10 yards out off a Perritt feed to push the lead to five at the end of three quarters.

The Orange continued the momentum in the fourth quarter, as junior defenseman Tyler Hlawati (Dublin, OH/Dublin Scioto) scored all alone in front 35 seconds into the final stanza, his first goal of the year, to put Syracuse ahead 10-4. Syracuse extended its five-goal run with 13:33 left in the contest, as junior attackman Chris Daniello (Cross River, NY/John Jay-Cross River HS) scored off a Nims feed. Maryland scored a pair of late goals in the final two minutes from senior attackman Scott Tompkins (Hunt Valley, MD/Gilman School) and Sieverts to make the final margin 11-6.

Story above courtesy of Hofstra
Posted by Peter Carey on Saturday, May 16, 2009