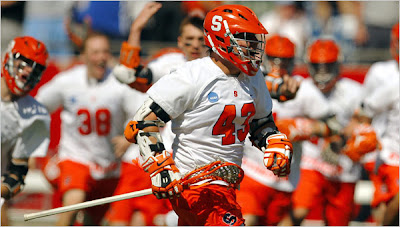 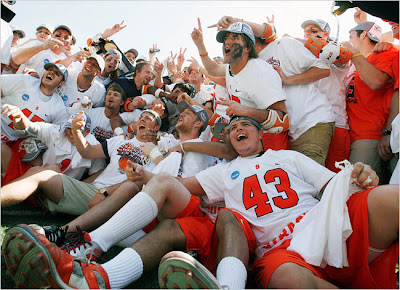 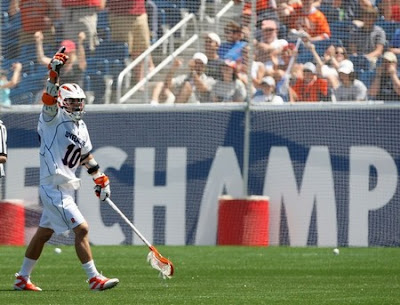 From the New York Times:

With a Late Rally, Syracuse Defends Its Title

FOXBOROUGH, Mass. — Syracuse attackman Cody Jamieson wound up his patented left-handed shot and did not even have to look to see the result. He was so confident that his point-blank offering in overtime had delivered back-to-back national titles for the Orange that he raced to celebrate with his best friend, Syracuse defenseman Sid Smith.

“I knew it was going to go in, so I took off running to try and find Sid,” Jamieson said.

Jamieson’s goal 1 minute 20 seconds into overtime Monday capped a furious four-goal run that gave the Orange a 10-9 overtime victory and the program’s 11th national title. From overcoming a three-goal deficit in the game’s final four minutes to scoring the chaotic tying goal with 4.5 seconds left in regulation, Syracuse produced plenty of mystical moments.

But few were sweeter than when the two biggest stars of overtime, childhood friends from the same Canadian reserve, locked in a celebratory embrace.

“We just looked at each other and said that we did it,” Jamieson said. “This is the reason why I came here. It felt good to win it with him.”

And just as when they played on the reserve in Six Nations, Ontario, the two old friends stole the show. Jamieson’s overtime winner came only because Smith, the unsung hero of the team, deftly stripped Cornell’s Ryan Hurley after the Big Red won the opening face-off of the extra period.

The Six Nations connection capped an improbable comeback for Syracuse, which did not lead until the final goal and looked listless on offense for most of the afternoon.

But there is an ethereal quality to the Syracuse program that tends to manifest itself on the biggest stages. That was never more clear than Monday, when the Orange delivered the program’s first back-to-back national titles since 1990.

You have been awarded the prestigious Lemonade Stand Award
http://www.liturgy.co.nz/blog/lemonade-stand/960