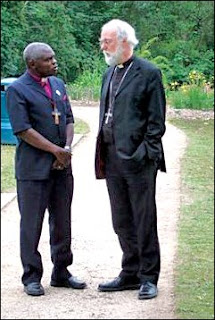 Here is a second installment of Maggie Dawn's interview with the Archbishops of Canterbury and York, Rowan Williams and John Sentamu ... pretty interesting all in all...

Blogging the Archbishops - the Future of the Church of England

I posted yesterday about the Archbishops’ views on blogging. I then went on to ask them about wider issues of cultural change. The new media are part of a much bigger cultural shift in the West, and Church practice already seems to be in a big transitional period, so how different do the Archbishops think the Church of England will be in twenty years time? Will the foundations of the Church of England be drastically different or remain essentially the same?

“I’m not good at predictions!” Archbishop Rowan smiled, and paused for a moment. “What I can tell you, though, is where I’d like us to be. I’d like there still to be the sense that the Church of England is there for everybody, with a sense of responsibility for a whole community, not just little bits of it. And I’d like there to be much, much more a network of small groups who are prepared to share and discuss and pray; move a little bit away from the standard size Sunday service.

“What about ancient Church buildings then”, I asked “If you want small groups, are the historic buildings part of your vision for the future?” “Well," Archbishop Rowan continued, "they can be a part of being there for everybody, so don’t knock it! – they can be a curse or a blessing.”

“My hope for the Church in twenty years’ time,” said Archbishop Sentamu, “is that that there will be more of a sense that the Church of England is something that people will positively celebrate, rather than just being their default position. You know at the moment, how people turn to the Church in a crisis, or when they get married, but ignore it the rest of the time. I’m looking for many more disciples who are serving God with their whole life, and who will rejoice that they are part of the Church. And as for buildings, well, there are a lot of Grade 1 listed buildings in the Dioceses of York. And they are a witness.”

“Are they?” I asked, “Are they really a witness to the Church or do they give more the impression that the Church is a museum piece?”

“Oh no!” they both said, practically in stereo, “Buildings speak to people…”

“They speak in positive ways,” continued Archbishop Rowan. “They make people ask, what’s this here for? Why is it here? What has happened here over time?”

“But look at the blog-world,” I said. “It reveals a fairly large number of people who self-identify as Christian but who do not regularly attend a place of worship in the formal sense. Spirituality and faith are clearly alive and well, but there are plenty of people who believe the Church in a fatal decline. Is there really a future for organised religion?”

“Human beings, by nature, always need a home,” said Archbishop Sentamu. “Whatever else happens to organised religion, if it’s providing a place of safety and identity, then future is very bright. If not, the future is bleak. The Church should be a home where the stranger finds love, and the lonely a welcome. When it loses those things, then it’s just an institution, and it’s bureaucratically passive. But organised religion is ambiguous. It can be a source of great good, or of evil.”

Archbishop Rowan continued, “If there is a future for organised religion, it’s because it offers a communal religion. The gospel mostly isn’t about individuals, but about living in co-operation. If you have a communal understanding of religion, sooner or later you begin to ask about how to hand on the experience. It’s never just a private spirituality. What the organisation itself looks like has already changed many times, and it will change again, maybe dramatically. But its purpose is this communal function, distilling and handing on.”

Tomorrow I'll post a third instalment of these interviews.