"I like to meet people where they're at," says roots musician Corey Harris '91.

At the moment, it's late on the afternoon of Feb. 29, a few hours before his performance in the Olin Concert Hall, and Harris is talking about how he will teach his master class the next day.

But the quote also does a good job describing how Harris' week as a Bates learning associate played out. He met students and faculty, their ideas and disciplines, with nuanced expertise.

On Tuesday afternoon, for example, Harris joined the discussion in Professor of History Margaret Creighton's course "Regions and American Culture."

There, he used his mastery of Delta blues to give insight into one part of Southern identity.

Actually, he let his guitar do the talking. "He showed us how blues technique varied across parts of the South, even demonstrating nuances between places only a hundred miles or so apart," says Creighton.

Praised as a blues revivalist in the '90s, Harris was already moving forward on an intellectual/musical excursion. "What I play is roots music," he said in 1997. "I'm grounded very heavily in blues but I let everything influence me from what I hear today to what I'm gonna hear to what I have heard. I try to be as open as I can."

Harris' noteworthy 2007 saw him receive an honorary Doctor of Music degree from Bates and a five-year, $500,000 "genius grant" from the MacArthur Foundation, which describes the artist as someone who "forges an adventurous path marked by deliberate eclecticism." Indeed, a glimpse at his touring schedule says it all: a banjo-based, roots-blues group performance at London's Barbican arts venue in late April followed by a reggae-tinged gig at the Lake Eden Arts Festival in North Carolina a few days later.

Harris calls his music "diaspora rock," and it's a passport of sorts. 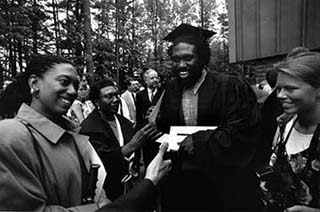 Corey Harris, seen here with family and friends at his Commencement in 1991, graduated with high honors in anthropology. He received an honorary Doctor of Music in 2007 and returned to campus as a learning associate in late February 2008. Photograph by David Wilkinson.
Posted by Peter Carey on Wednesday, March 05, 2008