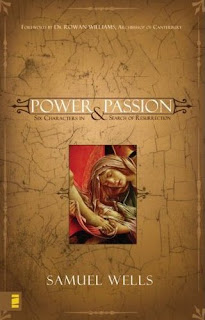 Today I picked up Power and Passion: Six Characters in Search of Resurrection, by Samuel Wells who is the Dean of the Duke University Chapel. I've had the book for about a year, and it has occupied a spot on the shelf of "books I purchased in seminary and really wanted to read but didn't make the time to read them yet (but wished I had), but it's never too late..." The shelf is pretty full, so I could probably put off buying any more books for quite some time.

In this book, Wells moves through the four canonical Gospel Narratives by looking in some depth at the characters of Pilate, Barabbas, Joseph of Arimathea, Mrs. Pilate, Peter, and Mary Magdalen. I have to confess that I am only about a third through the book, and just into the Barabbas section, but I expect to read the rest of the book tomorow - and then try to digest all that it has taught me over the next few weeks. As I sit here in the middle of the Diocese of Virginia in the middle of Lent, in the middle (Godwilling) of my life, in the middle of all the discussion and debate within our Church, and in the middle of a Presidential campaign, I found Samuel Wells' discussion of Power, and Passion to be helpful as I reflect on all that I have seen.

Just one tidbit from Samuel Wells' introduction caught me upside the head when he describe the two dominant poles of how people read the Bible (and the need to get into the middle between these extremes!)

"Two kinds of Bible readers shout loudest at present. One sees the Bible as a series of legal guidelines, handed down in an apparently arbitrary way by what seems to be a rather culturally distant God. The Bible appears to offer a rather constrained life, with plenty of prohibitions, but one that is claimed to be good for us in the end, certainly as far as eternal salvation is concerned. The problem with this rather constrained view of the Bible is its understanding of God as a mysterious judge with unfathomable expectations who is always likely to catch is people out. The second noisy kind of bible reader sees the Bible as a series of noble injunctions, largely about setting people free or affirming them as they are; the details get rather lost in the urge to generalize God's affirmation of humanity and his desire for flourishing life. The problem with this way of reading the Bible is that it calls into question why one would read the Bible at all, since it tells us little that has not already been well expressed by the poets, storytellers, and social prophets of every age. God tends to become invisible behind a cloud of abstract goals such as justice, peace, and love."

Now, I don't know about you, but in the places I go, these two "noisy readers of the Bible" certainly make themselves heard in our present discussions in The Episcopal Church and the Anglican Communion. Samuel Wells charts out a good middle course, a (forgive me) via media, between these noisy poles. Lord knows we need these voices, and others to help us have a fulsome harmony (cacophany?) in our Church!

My second Lenten "reading" is to watch "Monty Python's The Life of Brian" and just enjoy it - resist critiquing it, just enjoying the insanity and fun. Long before "The Last Temptation of Christ" gave people fits, Monty Python offered quite a response to all the Jesus films of the 1960s and 1970s. In the midst of Lent, I like to watch this film and enjoy the deep understanding that God gave us the gift of humor, and that we are called to be "Fools for Christ". Here is a clip from Youtube to enjoy (and there are more there as well)...."there's no pleasing some people"....