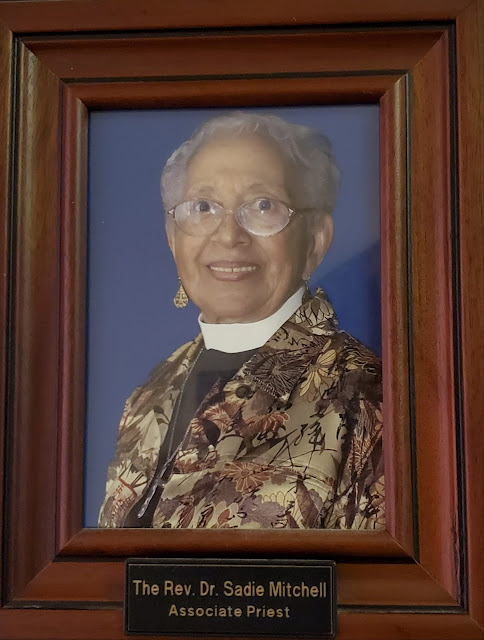 [Episcopal News Service] This is the last in a series of interviews ENS is publishing during Black History Month featuring interviews with Episcopalians involved in the civil rights movement and the church’s work of reconciliation.

A lifelong Philadelphia resident, the Rev. Sadie Mitchell says she never experienced the blatant discrimination that African-Americans did in the South, nor did the civil rights movement bring the sort of unrest to her city that it did to places like Selma, Alabama.

But, at 91, she admits to occasional impatience with the pace of full desegregation in the church and the rest of American society.

“Who wouldn’t get impatient when you want something and it’s not readily available?” she asked.

Living in Philadelphia, she said, “I was not restricted any place where I went.” If some place did discriminate against African-Americans, “my mother always protected us.”

“There was a movie [house] in West Philadelphia that directed black children to the balcony,” she recalled. Her mother didn’t let her go there.

Most restaurants served all races, she said. “I would say in a city as big as Philadelphia, you had maybe three or four restaurants that may not have allowed blacks in their restaurants, and they were on Broad Street and in Center City, mostly. That went away so fast when civil rights began its movement that it made no dent in my life at all.”

But that doesn’t mean there weren’t inequities. “We were not as blatant in the discrimination and segregation on the North … but they still went on. For instance, we had black schools and white schools. Nobody ever speaks of that, but we did. There were certain schools in certain areas that were considered all black. No white children attended those schools at all.”

Schools in northeast Philadelphia were all white unless black families with children moved to the neighborhood, she said.

After the civil rights movement began, “after all that was going on in the South, the tenor seemed to change and you had a different thinking of whites – some whites, not all whites – and [black] children were allowed to come up to those schools, but not in droves, not in large numbers until the schools were [legally] demanded to desegregate and they were demanded to use buses to desegregate,” she said. “When they started doing that, you had white children coming into certain black schools in certain areas, and you had black children going into certain white schools by bus in the northeast, and then little by little, with faculty and students, you began to have some desegregation.”

From 1969 to the late 1980s, Mitchell served as principal at three all-black schools in succession, the first located in a white neighborhood. While many people claimed that educational inequities existed between Philadelphia’s black and white schools, the differences were “not quite as dire” as in the South.

“There were not inequities in my three schools,” she said. “I knew how much money I was getting, and I knew how to order the books and other materials, so I never allowed us to have a dearth of materials.”

Educational directives came from the state, “so everyone was to teach the same thing. Now what we did teach in the black schools, which some of the white schools refused to teach … was black history.”

Mitchell participated in one civil rights march, part of a successful effort to break the will that restricted admission to Girard College. “That was not a real college. They called it a college, but it was a school for white boys only,” she explained.

The march was “very quiet,” she said. “Except for talking, you didn’t hear a sound. There was no violence. We just walked with banners.

“That was the only march I took place in. I did not go down to the South for the marches down there.” But the Rev. Jesse Anderson Sr., rector of the African Episcopal Church of St. Thomas that she attended, did march in the South and also invited the Rev. Martin Luther King Jr. to speak at the church. The Rev. Absalom Jones, first black priest ordained in the Episcopal Church, founded St. Thomas in 1792.

On the night King was assassinated in 1968, Mitchell was attending a meeting at a school as assistant to the district superintendent. “The program was stopped. We were allowed to leave early … because everyone was up in arms about this death, and they just couldn’t believe it. These were whites and blacks, mostly whites.”

Although she worked in education, Mitchell long had been interested in the ministry and felt “the call” following the “irregular” ordination of 11 women to the priesthood in Philadelphia in 1974. General Convention subsequently approved women’s ordination in 1976. She was ordained a deacon in 1987 and a priest in 1988, becoming an assistant at St. Thomas a year later. Although retired from that position, “Pastor Sadie” continues to serve in the parish.

“Priests do not retire,” she said. “You just get up there when you can.”

While still a member of the laity, she served on the diocesan Restitution Commission, formed in response to civil rights leader James Foreman’s “demand that the ‘white church’ supply reparations to the black community,” said Arthur Sudler, director of the St. Thomas Historical Society. “In large measure the RC mirrored the church’s controversial General Convention Special Program inaugurated by Presiding Bishop John E. Hines” to combat poverty and injustice in black urban areas.

“The black members of the RC disagreed amongst themselves about the way in which the organization should operate – especially in regard to the issuance of funds to community organizations,” Sudler said.

Ultimately, Mitchell and Anderson, also a member, left the commission. “I do not feel that we had enough knowledge of what we were doing,” she said. “We seemed to be floundering … it didn’t go anyplace.”

But she perceives a lack of leadership by some clergy in combating segregation beyond participating in the civil rights marches. There are white clergy who “will not speak out in their churches,” she said. “Now, that is not everybody, but that’s enough to make a problem. They didn’t speak out before, and they’re not speaking out now. So you have pockets of segregation, where if the priest would open his mouth and talk to his congregation, he could bring something about. … You still have clear white pockets all over in every diocese across the country.”

“A lot more has to be done to recognize full equality,” she said. “But it is moving, and like all progress, it is slow.”

In the broader society, she said she was surprised but happy when President Barack Obama became president, “but I think what is going on now is a disgrace,” she said, citing verbal attacks on him that she believes are racially motivated. “I just decry all of that, and I wish it would be over.”

But she remains optimistic about the future of race relations.

“I do feel hopeful, even though it’s taking a long time. I feel hopeful that this situation is going to right itself, and I do believe God is working in his timeframe, taking the time to see all this through and coming to a point where it meets his live and his peace,” she said. “The peace of God and the love of God, I feel, will shine through. But I think God is taking his time to do that.”

—Sharon Sheridan is an ENS correspondent.