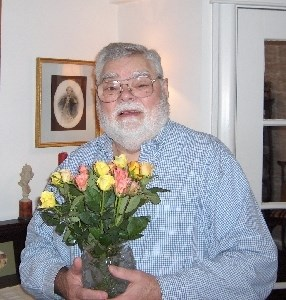 A resident of Cathedral Village, Andorra, Albutt Gardner was born and raised in Franklin, Virginia, and graduated from Franklin HS in 1947. He graduated from Mars Hill College, NC with an AA degree, then received a BA from the University of Richmond, VA. He was ordained as a Baptist minister in July 1951, and served in Oak Grove, Virginia. After graduating with a Master of Divinity from Crozer Theological Seminary, PA in 1955, he moved to Michigan and was pastor at Congregational churches in Morenci, Comstock Park and Manistee.
He then returned to Delaware and was ordained as an Episcopal priest in June 1965 and served the church until his retirement in 1994. He first served at the Cathedral of St. John in Wilmington, DE, then Christ Church in Milford, DE before becoming Rector of St. Paul's Episcopal Church in Elkins Park, PA. He later served as Vicar at All Saints Church, Crescentville PA until he retired. After he retired, he continued to serve by helping at Trinity Church, Gulph Mills PA in several roles, and at St. Martin's in the Field Church, Chestnut Hill. Al was a docent at the Univ of PA Museum of Archaeology and Anthropology, and was a member of the Oak Lane Shakespeare Club of Philadelphia.
He is the author of "Roots in Colonial Virginia: William Leonard Joyner and His Descendants" a book about his maternal grandfather. In lieu of flowers, Father Gardner's family requests memorial gifts to St. James School, 3217 West Clearfield, Philadephia, PA 19132 Al is survived by his partner Rodney R. Michel, and his 3 sons Randy Gardner of Arcata, CA, Al Gardner of Levelland, TX and Geoffrey Gardner of Norristown, PA. He is also survived by four grandchildren and four great-grandchildren. He was pre-deceased by his wife of many years, Ruth Hines Gardner, his daughter Ruth E. Gardner and son Mark F. Gardner. He was dearly loved and will be missed by many. Services will be held in late Spring or early Summer 2021.
Published in The Philadelphia Inquirer on Dec. 18, 2020.
Posted by Peter Carey on Thursday, December 31, 2020