Another GenX Bishop: Diocese of Texas elects the Rev. C. Andy Doyle to be Bishop Coadjutor!!! 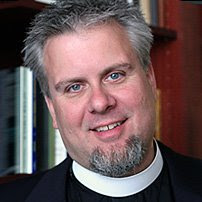 The Rev. C. Andrew Doyle was elected May 24 to be the ninth bishop of the Episcopal Diocese of Texas.

Doyle, 41, is a native of the diocese who has spent his entire ordained ministry in the diocese. He is currently canon to the ordinary for Texas Bishop Don Wimberly. Doyle describes himself in his autobiographical sketch as having grown up "High Church Anglo-Catholic." He and his wife JoAnne are the parents of Caisa, 11, and Zoë, 6.

He earned the Master of Divinity degree from Virginia Theological Seminary in 1995, was ordained deacon in the Diocese of Texas later that year and ordained a priest in 1996. Doyle served at St. Stephen's School in Austin, Texas; Christ Church in Temple, Texas; and St. Francis Episcopal Church in College Station before becoming canon to the ordinary in 2003.

Doyle was elected on the fourth ballot from among six nominees. He received 264 of 481 votes in the lay order and 128 of 247 in the clergy order. An election on that ballot required 241 lay votes and 124 clergy votes.

Results of all the ballots are available here.

Under the canons the Episcopal Church (III.16.4 (a)), a majority of bishops exercising jurisdiction and diocesan standing committees must consent to Doyle's election and ordination as bishop within 120 days of receiving the consent request.

Assuming such consent, Doyle will become the second-youngest bishop in the Episcopal Church. The youngest bishop, Northwestern Pennsylvania Bishop Sean Rowe, 33, was elected on May 19, 2007.

He will succeed Wimberly, who was elected the eighth bishop of Texas in 2004. He faces mandatory retirement in June of 2009 at the age of 72. Wimberly had called for the election of a bishop coadjutor in February at the 159th annual diocesan convention in Galveston.

The other nominees were:

More information about Doyle and the other nominees is available here.

A date for Doyle's consecration has yet to be determined.

The Diocese of Texas, encompassing 156 congregations and more than 85,000 members in Eastern Texas, was officially organized in 1849 and is one of six dioceses in the state. It also includes 15 campus ministries and numerous institutions, including the well-known Camp Allen Camp and Conference Center and the Episcopal Theological Seminary of the Southwest.