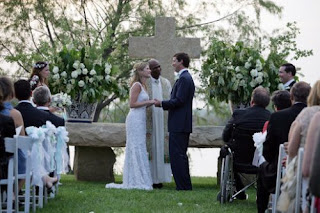 Well, actually it was the minister who officiated at Jenna Bush's wedding who is the Obama supporter ... but, the headline above is more interesting...

No question about it, this is the picture of the day. Here’s the lede from the New York Times, taking the details right down to the one that will have tongues wagging a bit inside the Beltway:

Although the Bush family kept up a strict zone of privacy around the events, the tiny town of Crawford made merry on its own. Souvenir shops hung banners wishing Ms. Bush, 26, and Mr. Hager, 30, well. Jenna-and-Henry coffee mugs, mouse pads and coasters flew off the shelves. One shop served wedding cake.

On Saturday afternoon, the Hager family hosted wedding guests at a barbecue in Salado. The wedding, which began at 7:30 p.m., took place on the Bush ranch, before a white limestone altar erected next to a man-made lake. The Rev. Kirbyjon Caldwell of Windsor Village United Methodist Church in Houston officiated at the ceremony. Mr. Caldwell, a longtime religious adviser to Mr. Bush, has endorsed Senator Barack Obama.

As you would expect, every major news story mentions this final detail — so much so that it is almost impossible to find a Google search combination that actually gets you any meaningful details about Caldwell’s involvement. You just get that one political note.

However, over at Beliefnet.com there is an interview with Caldwell — a rather traditionalist United Methodist of evangelical leanings, in the doctrinal sense of that word — in which he talks about his decision to back Obama:

One, I think he’s just a solid man. He’s a solid, spiritual man, and I have a great deal of respect for him as an individual.

Number two, when he initially announced, they said, “Well, he will be a symbolic candidate. He has no chance of winning.” And then he began to attract, you know, crowds of 20, 30, 40,000. Then they’d say, “Well, he may attract twenty, thirty thousand folk at a time, but he won’t be able to raise any money.” And then he started raising a ton of money. Then, they said, “Well, he’s not black enough.” Well, clearly he is. Then they said, “He’s too black.” Well, that’s ridiculous. Then they said, “Well, you know, he doesn’t like white folk because his pastor says whatever.” And I think folks forget his mother was white, for goodness sake. The grandmother of his children are white. I mean it just — that’s just a ridiculous argument.

Then, they said, “Well, he’s Muslim.” And he’s confessed his faith — I would say that he’s more of a Christian than some folk who claim to be Christian, because he didn’t grow up in a Christian house. He had to declare his faith separate and distinct from his — from the house that he grew up in.

Now what you will not find, in this interview, is how Caldwell squares his endorsement with any of the moral and cultural issues involved. In other words, with the actual religious content of Obama’s faith and that of the United Church of Christ. Again, the basic, foundational questions are missing as the interview rushes on to the strictly political.

I would have been interested in hearing what Caldwell has to say...