Rowan Williams writes in Time about Bartholomew I 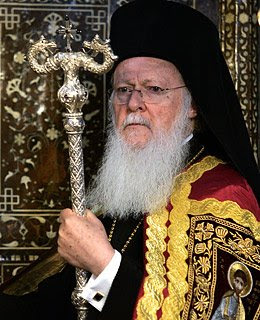 There is an interesting article in Time Magazine by the Archbishop of Canterbury, Rowan Williams. Before becoming an Anglican priest, Williams considered ordination in the Russian Orthodox Church, having done his dissertation on 20th Century Russian Orthodox Theologian, Theodore Lossky (his dissertation is unpublished, but just excellent (no surprise there!), and I hope he does publish it).

I think this Time Magazine article is also interesting coming from Archbishop Williams at this time, as he reflects that since Bartholomew I has "little direct executive power in the world of Eastern Orthodoxy" he has to find his authority on the world stage. Perhaps this reflects Williams' own experience as he contends with just how much authority the position of Archbishop of Canterbury has in our 21st Century, Post-Modern world. I also think it interesting that Williams seems to admire Bartholomew I for his work to make the environment and ecology a central part of his work. I lament the fact that our own Anglican Archbishop of Canterbury has had to spend so much time contending with schismatics and angry Anglicans that his voice and attention to issues of war, poverty, and the environment has been less than it might have been.

I wonder if Archbishop Rowan Williams has perhaps revealed a bit of his own lament for where he has placed his attention (even if he was forced to) over these last 5 years.

I appreciate Rowan Williams' piece in which he admires Bartholomew I and I hope emulation follows.

The Ecumenical Patriarch of Constantinople enjoys a resonant historical title but, unlike the Pope in the Roman Catholic context, has little direct executive power in the world of Eastern Orthodoxy. Patriarchs have had to earn their authority on the world stage, and, in fact, not many Patriarchs in recent centuries have done much more than maintain the form of their historic dignities.

Patriarch Bartholomew, however, has turned the relative political weakness of the office into a strength, grasping the fact that it allows him to stake out a clear moral and spiritual vision that is not tangled up in negotiation and balances of power. And this vision is dominated by his concern for the environment.

In a way that is profoundly loyal to the traditions of worship and reflection in the Eastern Orthodox Church, he has insisted that ecological questions are essentially spiritual ones....