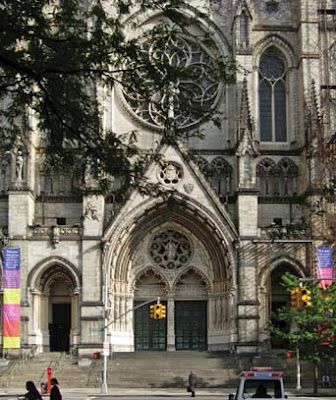 Almost seven years to the day after a devastating fire (let's just say that 2001 was a really bad year!), the Cathedral Church of St. John The Divine in NYC has been cleansed and will be rededicated on Advent I. A great day for the Cathedral, the Diocese, the Church and the City.

NY Times: After Smoke, Soot and Water, a Great Church Is Cleansed

The Very Rev. James A. Kowalski has been dean of the Cathedral Church of St. John the Divine for nearly seven years. In all that time, he has never heard its great organ played during a worship service. On Sunday, he will finally have his chance.

So will countless congregants and visitors as the Episcopal cathedral is formally rededicated. Everyone is invited to the 11 a.m. service, though the cathedral advises the public to arrive at least an hour early to claim passes for unreserved seats. At least 3,000 people are expected to attend.

more information on the Cathedral of St. John the Divine here: http://www.stjohndivine.org/
Posted by Peter Carey on Saturday, November 29, 2008