Thirteen Books that Changed America - by Jay Parini - What are YOUR 13?

Middlebury College professor of English and author, Jay Parini has a new book out in which he discusses the "Thirteen Books that Changed America." Take a look at this article from Vermont Public Radio (and you can listen to the interview). What would be YOUR 13? 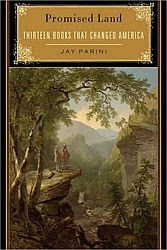 From the millions of published books throughout America's history, how do you even begin to choose the ones that have mattered most?

Middlebury professor and author Jay Parini has set out to do just that. His new book, Promised Land: Thirteen Books that Changed America outlines the texts he believes have had the most influence on our country's culture. He joins us to talk over his choices and his selection process.

Also, one of the surprise upsets on Election Day came in the race for county treasurer in Grafton County, New Hampshire. Vanessa Sievers, a 20 year old Dartmouth College junior, defeated the long-time incumbent, Carol Elliott, by 500 votes. But the incumbent claims she lost because of "brainwashed college kids." Valley News reporter John Gregg fills us in on the details.

And, we visit Mama and Pappa Z's, a Brattleboro restaurant with a tiny church behind it, where an Orthodox priest and his wife serve up spiritual sustenance with their pizzas and calzones.

The Autobiography of Benjamin Franklin

The Journals of Lewis and Clark

The Souls of Black Folk

How to Win Friends and Influence People

The Common Sense Book of Baby and Child Care

Just off the top of my head, I'd add:

The Strange Career of Jim Crow, by C. Vann Woodward

The Other America, by Michael Harrington

Krishnalal Shridharani, War Without Violence: A Study of Gandhi's Method and its Accomplishments (published in 1939, studied by members of the Congress of Racial Equality as a guide to nonviolent direct action)