What you should be reading? #1 - Malcolm Gladwell's Outliers 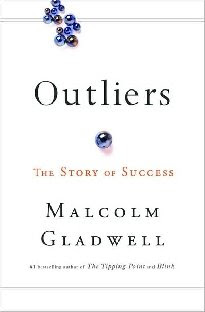 Ok, I do believe in the Holy Spirit, and I believe that she (he?) works kinda like the secular-ists call synchronicity. In the last three days, I've had 4 people discuss or tell me about Malcolm Gladwell's (author of Tipping Point) new book, "Outliers." Stephen Colbert interviewed Gladwell on Comedy Central, Diana Butler Bass referred to him in her lecture today at St. Stephen's Church, Richmond, and I heard two different conversations that referred to it. So, there it is, go read the book (I just ordered it).

You can check out an extract from the book on the Guardian's (UK) website, HERE. And, I've posted a bit below.

"The University of Michigan opened its new computer centre in 1971, in a low-slung building on Beal Avenue in Ann Arbor. The university's enormous mainframe computers stood in the middle of a vast, white-tiled room, looking, as one faculty member remembers, "like one of the last scenes in 2001: A Space Odyssey". Off to the side were dozens of key-punch machines - what passed in those days for computer terminals. Over the years, thousands of students would pass through that white-tiled room - the most famous of whom was a gawky teenager named Bill Joy.

Joy came to the University of Michigan the year the computer centre opened, at the age of 16. He had been voted "most studious student" by his graduating class at North Framingham high school, outside Detroit, which, as he puts it, meant he was a "no-date nerd". He had thought he might end up as a biologist or a mathematician, but late in his freshman year he stumbled across the computing centre - and he was hooked.

From then on, the computer centre was his life. He programmed whenever he could. He got a job with a computer science professor, so he could program over the summer. In 1975, Joy enrolled in graduate school at the University of California, Berkeley. There, he buried himself even deeper in the world of computer software. During the oral exams for his PhD, he made up a particularly complicated algorithm on the fly that - as one of his many admirers has written - "so stunned his examiners [that] one of them later compared the experience to 'Jesus confounding his elders' ".

Working in collaboration with a small group of programmers, Joy took on the task of rewriting Unix, a software system developed by AT&T for mainframe computers. Joy's version was so good that it became - and remains - the operating system on which millions of computers around the world run. "If you put your Mac in that funny mode where you can see the code," Joy says, "I see things that I remember typing in 25 years ago." And when you go online, do you know who wrote the software that allows you to access the internet? Bill Joy.

After Berkeley, Joy co-founded the Silicon Valley firm Sun Microsystems. There, he rewrote another computer language, Java, and his legend grew still further. Among Silicon Valley insiders, Joy is spoken of with as much awe as Bill Gates. He is sometimes called the Edison of the internet.

The story of Joy's genius has been told many times, and the lesson is always the same. Here was a world that was the purest of meritocracies. Computer programming didn't operate as an old-boy network, where you got ahead because of money or connections. It was a wide-open field, in which all participants were judged solely by their talent and accomplishments. It was a world where the best men won, and Joy was clearly one of those best men."