Rowan Williams is in DC for the Summer, and I'm moving! 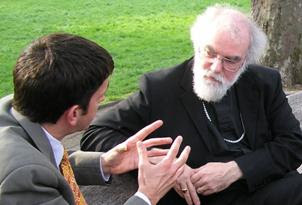 Alright, I just realized through some sniffing around on the blogosphere that the Archbishop of Canterbury, Rowan Williams, is in DC and will be here (at Georgetown) for the summer. On the Episcopal Life page here, it mentioned that the Presiding Bishop Katharine Jefferts Schori met with the Archbishop last week in DC.

"Jefferts Schori also outlined her travel schedule and the various groups and people with whom she has met. Most recently she spent time with Archbishop of Canterbury Dr. Rowan Williams while she was in Washington D.C. last week to testify on global warming before a U.S. Senate committee hearing. Williams is spending much of a three-month sabbatical at Georgetown University." (From Episcopal Life)

From the Episcopal Cafe blog:
"The Archbishop of Canterbury, Dr. Rowan Williams, will spend much of his summer sabbatical at Georgetown University sources in England and Washington confirmed today.

Williams, has stayed at the Jesuit university twice previously during seminars of interfaith scholars, and is friendly with the university's president John J. DeGioia.

Williams has not visited Episcopal churches during his previous visits, although he has held breakfast meetings with prominent local church leaders. He has refused numerous requests to participate in Episcopal Church events."

The Archbishop is quite a lightning rod these days for many people, and I must admit that my own understanding of, and feelings about him are complex. However, I spent 12 months writing an M.Div. Honors thesis that had him as a central voice - along with Dietrich Bonhoeffer and James Cone; and I would have loved to get the chance to hear him speak this summer.

The bummer about this for me is that I am moving to NYC for the summer, and then to Richmond in August to begin work as a chaplain.
Posted by Peter Carey on Wednesday, June 13, 2007