Tomorrow is the day of fasting and prayer in recognition of the Millennium Development Goals which are the goals to eradicate extreme world poverty by the year 2015. I will be blogging on this topic, but more importantly prayers and action are needed to accomplish these incredibly important goals. I believe that we are entering an era of uncertainty, anxiety, fear and conflict that desperately needs people of faith to engage the world in a real way, while also drawing deep from the traditions that we have been given. Rabbi Abraham Joshua Heschel has this wonderful quote about religion's "decline" ... I hope we counter this decline in order to contend with the pain and suffering in this world. Below Rabbi Heschel is marching with Dr. Martin Luther King in the 1960s. 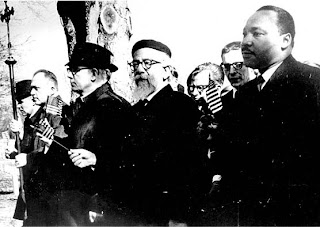 “Religion had declined not because it had been successfully argued against, but because it had become irrelevant, dull, oppressive, uninteresting. When faith is replaced by creed, worship by discipline, love by habit; when the crises of today are ignored because of the remembered splendor of the past; when faith becomes an inherited heirloom rather than a living fountain; when religion speaks only in the name of authority and rules rather than the voice of compassion, its message becomes meaningless.”


hat-tip goes to Susan Russell at "An Inch at a Time" blog
Posted by Peter Carey on Wednesday, September 24, 2008

Email ThisBlogThis!Share to TwitterShare to FacebookShare to Pinterest
Labels: Abraham Joshua Heschel, An Inch at a Time, MLK Jr