Sunday Blogrollin' .... some blogs I read 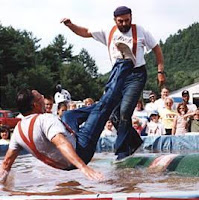 To give this blog a little (but not too much) structure, I'm going to start giving some blog recommendations on Sundays...themes for other days of the week to come soon....

Here are some of the blogs that I read, described here for your amusement and enjoyment, and (sometimes) edification and learning...

CoreyHarris.com
Corey Harris is an absolutely incredible blues and reggae musician who also was an honors graduate of Bates College in Anthropology back in 1991. He was featured in a PBS Documentary by Martin Scorcese on The Blues, and has won numerous awards. He and I graduated from Bates together and I knew him a bit at Bates and had some mutual friends in common. He's currently on tour in France. September of 2007 The John D. and Catherine T. MacArthur Foundation announced that Harris is among 24 people named MacArthur Fellows for 2007. The award comes with $500,000 to be given over five years, with no strings attached. You really should check out his music! Here is the video from the MacArthur Foundation.

Father Matthew Presents
Matthew Moretz is an Episcopal priest up in the Diocese of New York and has an amazing ability and gift with making short videos on elements of the church. He can boil down Anglican Theology to a 3 minute YouTube clip, or can breathe life into a visit to a church attic. He is funny, brilliant, and down to earth. Check him out, whether you give 2 bits about the church, or not.

Sojourners and God's Politics
I have long loved to read Sojourners Magazine and their online work at "Sojo.net," now, with a partnership with Beliefnet, Jim Wallis and others are presenting some challenging and wonderful stuff over at "God's Politics Blog." Really helpful stuff for people who want to see transformative change in the world in order to help the poorest of the poor, and all those who are oppressed. There is a lot of good stuff going on here, and some wonderful visionaries are featured here as well. From the Blog's own descrition, "Join the God's Politics dialogue with Jim Wallis and friends Brian McLaren, Diana Butler Bass, Becky Garrison, Gareth Higgins, Shane Claiborne, Mary Nelson, Gabriel Salguero, Tony Campolo, and others."

A Guy in the Pew
I really like this blog that looks at religion, science, and a nice variety of subjects, but many of the posts are about the Episcopal Church and the Anglican Communion. Chuck Blanchard has a really fine take on many of the controversial topics in our church and in our world. I tend to read his postings nearly every day and I marvel at his ability to analyze and reflect upon some important issues. Check out his stuff!! He also writes for the "Episcopal Cafe" Blog over at the Episcopal Diocese of Washington (DC).

PoetProph
I really like this blog by Dr. Kathleen (or Kathy) Staudt. She is a wise spiritual director, great poet, and wonderful teacher. She played a significant role in my own spiritual and religious development while I was in seminary at VTS, and I thank her for her tremendous wisdom and courageous witness. Check out her blog, it's really good. She also blogs every time and again at the "Episcopal Cafe" hosted by the Episcopal Diocese of Washington (DC).

Episcopal Cafe
Ok, now that I've mentioned the "Episcopal Cafe" blog which is hosted by the Episcopal Diocese of Washington (DC, that is), I need to give them some props. The blog started (I think) as a reflection on that short-lived TV Show "Book of Daniel" (or, something of that sort) but now has morphed into a really great Blog site with art, poetry, a daily reading, video clips, and some great Episcopal Church gossip and discussion and dialogue and stuff. I have a good time on this blogsite, but then, I am a church geek. But, I think there is a lot here for just about everyone on the church-geek spectrum...

Slow Leadership
I'm not sure where I first heard about this blog about "slow leadership," though it may have been on the Episcopal Cafe blog (go figure). Wherever I heard about it, this is a blog I read often, as it offers an incredible corrective to the hyperspeed life of a leaders and managers. I find this philosophy of leadership to be harmonious with a Christian theology of leadership while also reminding me of my academic studies of Taoism and even reminds me of the Sufi mystic, Rumi. The blog has some great posts, and some wonderful reflections.

Seminar on Conflict Ecclesiology
I recommend this blog, not just because I am one of the members of this seminar (though I have only written very infrequently on the blog). The reason I really like this effort is that there is some really good analysis and reflection on the issue of Ecclesiology, or "theology of the church," that is, I think so essential for Christians to consider and debate and discuss and pray about in these days that some have called "post-Christian," or at least "post-Christiandom" ... I urge everyone to take a good look at the blog, and then offer your thoughts ... there is a lot here, and it lands pretty far up on the "Church Geek" meter, but I think the discussion is getting into some really interesting and cool topics. Check it out!


Ok, that's about enough for today, but I"ll highlight some more good blogs next Sunday...have a great week!