Waking Up to War with Iran? (from Brian McLaren)

Are we ready to take to the streets if the Bush Administration puts us into war in Iran?
Or, are we ready to enlist?
Should we be more afraid of our own government than of Iran?
What should Christians do in this context of protracted war?
Brian McLaren has challenged us in his blog entry on the "God's Politics Blog" that begins to address these questions.

Will we have ears to hear?

Waking Up to War with Iran (by Brian McLaren) 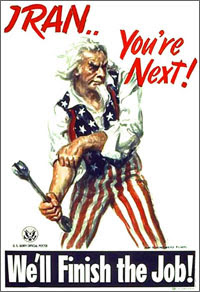 I am disgusted, concerned, appalled, and furious about the current saber-rattling of our government - so reminiscent of the buildup to the invasion of Iraq. My feelings intensify in many of our presidential candidates' forums, where each candidate seems to be in a hissing contest, declaring that he or she is the loudest hisser against terrorism - as if the only danger in the world is posed by an evil "them" and not by evil resident within us. Our Congress' bipartisan vote last month, which labeled the Iranian Revolutionary Guard Corps a terrorist organization, seems to me to be handing our president a "go to war free" card, another rather frightening development.

Meanwhile, our media are becoming an echo chamber of fear: after all, fear keeps people tuned in, which means better ratings, and thus more advertising income. Fear pays - economically and politically - but sadly, we haven't reached the point yet of fearing fear itself and what it may do if it keeps accelerating.

On top of these fears, I suspect that many of my fellow Christians will, in the name of God and Jesus and Christianity and the Bible, support and justify a preemptive war on Iran before and after it happens - no matter how unprovoked, no matter how brutal, and no matter how foolish and costly, both financially and morally. Forgetting even the traditional Christian criteria for just war, and forgetting the falsified "intelligence" used to justify our last preemptive war, we Christians in the U.S., I fear, will once again be high on credulity and low on scrutiny - all too eager to believe what our government tells us to legitimize a pre-emptive attack and feed our growing fears. We Christians who cannot follow this path into another war must ask ourselves two kinds of questions: