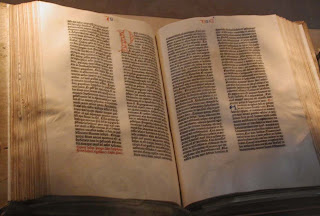 My former professor and friend Diana Butler Bass has written a very interesting piece on the "God's Politics" blog in which she offers important reflections about Democrats running for president who may know their theology and their Bible better than Republican candidates. This observation is in concert with her claim that the linear (and simplistic) description of Left/Liberals on one end with Right/Conservatives on the other end of the spectrum is an inaccurate and unhelpful model in both politics and in theology. In my own understanding of politics and theology I cannot any longer place myself in solely "one camp" and I find myself often disagreeing with knee-jerk liberals on many issues, while also finding hard-line conservatives to be unsatisfactory much of the time. Does this mean that I am in the mushy middle? I do not know, and reserve the right to change, develop, listen to a variety of opinion, and find an approach that makes sense to me. Some of the discussion of "Generous Orthodoxy" that Brian McLaren discusses appeals to me, but I am no expert on what this actually means, and need to explore it further

One of the great gifts of seminary was that I developed close friendships with people that "on paper" I should not have been friends with, based on some simplistic theological or political or regional "litmus test." I wholeheartedly believe that God's view is wider and broader and deeper than my own limited understanding, so who am I to judge harshly those who might have a different view. I also believe that at the foot of the cross and on the Eucharistic table there is room for all of us to bring our burdens, lay them down, and find forgiveness, fellowship and reconciliation.

It seems to me, that the Holy Spirit is at work in our presidential politics and doing, perhaps, surprising, new things in unexpected ways ... I am curious about the next chapter of this "book" in which we are all characters!

What Will Dobson Do? (by Diana Butler Bass)

With James Dobson and major conservative evangelical leaders threatening to bolt the Republican Party if Rudy Giuliani is nominated for president, conventional wisdom about God and politics has been turned on its head. For the last 25 years, conservative evangelicals could reliably count on the Republicans to choose a candidate acceptable to their version of Christian politics. This year, however, the leading Republican candidates seem unable to articulate any convincing religious message, much less a strongly biblical perspective on issues. All the while, the three leading Democratic candidates can testify to personal faith, possess robust theological views, and ground many policies in broadly biblical principles.

In recent weeks, Rudy Giuliani has awkwardly quoted scripture ("let he who is without sin cast the first stone") to defend his personal record with adultery, multiple divorces, and family dissension. John McCain, an Episcopalian, said he was really a member of a Baptist church in Phoenix for the last 20 years—only to later confess that he had not been baptized in that tradition, thus excluding him from membership in the congregation. Fred Thompson rarely attends church.