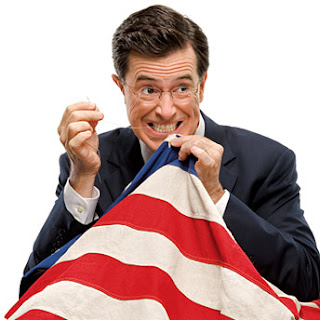 Stephen Colbert has "guest written" Maureen Dowd's New York Times opinion letter this week, and,...he's running for president (but only in South Carolina)...he cracks me up:

I Am an Op-Ed Columnist (And So Can You!)

Surprised to see my byline here, aren’t you? I would be too, if I read The New York Times. But I don’t. So I’ll just have to take your word that this was published. Frankly, I prefer emoticons to the written word, and if you disagree :(

I’d like to thank Maureen Dowd for permitting/begging me to write her column today. As I type this, she’s watching from an overstuffed divan, petting her prize Abyssinian and sipping a Dirty Cosmotinijito. Which reminds me: Before I get started, I have to take care of one other bit of business:

Bad things are happening in countries you shouldn’t have to think about. It’s all George Bush’s fault, the vice president is Satan, and God is gay.

So why I am writing Miss Dowd’s column today? Simple. Because I believe the 2008 election, unlike all previous elections, is important. And a lot of Americans feel confused about the current crop of presidential candidates.

And Fred Thompson. In my opinion “Law & Order” never sufficiently explained why the Manhattan D.A. had an accent like an Appalachian catfish wrestler.

Well, suddenly an option is looming on the horizon. And I don’t mean Al Gore (though he’s a world-class loomer). First of all, I don’t think Nobel Prizes should go to people I was seated next to at the Emmys. Second, winning the Nobel Prize does not automatically qualify you to be commander in chief. I think George Bush has proved definitively that to be president, you don’t need to care about science, literature or peace.

While my hat is not presently in the ring, I should also point out that it is not on my head. So where’s that hat? (Hint: John McCain was seen passing one at a gas station to fuel up the Straight Talk Express.)

Others point to my new bestseller, “I Am America (And So Can You!)” noting that many candidates test the waters with a book first. Just look at Barack Obama, John Edwards or O. J. Simpson.

Look at the moral guidance I offer. On faith: “After Jesus was born, the Old Testament basically became a way for Bible publishers to keep their word count up.” On gender: “The sooner we accept the basic differences between men and women, the sooner we can stop arguing about it and start having sex.” On race: “While skin and race are often synonymous, skin cleansing is good, race cleansing is bad.” On the elderly: “They look like lizards.”

Our nation is at a Fork in the Road. Some say we should go Left; some say go Right. I say, “Doesn’t this thing have a reverse gear?” Let’s back this country up to a time before there were forks in the road — or even roads. Or forks, for that matter. I want to return to a simpler America where we ate our meat off the end of a sharpened stick.

Let me regurgitate: I know why you want me to run, and I hear your clamor. I share Americans’ nostalgia for an era when you not only could tell a man by the cut of his jib, but the jib industry hadn’t yet fled to Guangdong. And I don’t intend to tease you for weeks the way Newt Gingrich did, saying that if his supporters raised $30 million, he would run for president. I would run for 15 million. Cash.

Nevertheless, I am not ready to announce yet — even though it’s clear that the voters are desperate for a white, male, middle-aged, Jesus-trumpeting alternative.

What do I offer? Hope for the common man. Because I am not the Anointed or the Inevitable. I am just an Average Joe like you — if you have a TV show.