Desmond Tutu and Nelson Mandela convene "The Elders" - thanks be to GOD!

Will, over at "Yearns and Groans" blog has posted this item, and I feel some hope and gladness at what this group may offer us in our times of ghastliness! 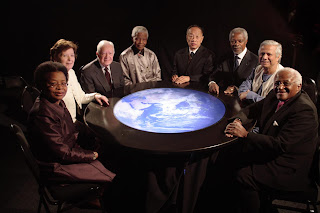 Despite all the ghastliness that is around, human beings are made for goodness. The ones who ought to be held in high regard are not the ones who are militarily powerful, nor even economically prosperous. They are the ones who have a commitment to try and make the world a better place. We – The Elders – will endeavour to support those people and do our best for humanity. - Desmond Tutu

Out of deep concern for the challenges currently facing all of the people of our world, Nelson Mandela, Graça Machel and Desmond Tutu have convened a group of leaders to contribute their wisdom, independent leadership and integrity to tackling some of the world's toughest problems.

Please check out the Associated Press story about "The Elders" visit to the Sudan. Click here to read "The Elders" arrival statement.

KABKABIYA, Sudan — Former President Carter got in a shouting match Wednesday with Sudanese security services who blocked him from a town in Darfur where he was trying to meet with refugees from the ongoing conflict.

The 83-year-old Carter walked into this highly volatile pro-Sudanese government town to meet refugees too frightened to attend a scheduled meeting at a nearby compound. He was able to make it to a school where he met with one tribal representative and was preparing to go further into the town when Sudanese security officers stopped him.

"You can't go. It's not on the program!" the local security chief, who only gave his first name as Omar, yelled at Carter, who is in Darfur as part of a delegation of respected international figures known as "The Elders."

"We're going to anyway!" an angry Carter retorted as a crowd began to gather. "You don't have the power to stop me."

U.N. officials told Carter's entourage the Sudanese state police could bar his way. Carter's traveling companions, billionaire businessman Richard Branson and Graca Machel, the wife of former South African President Nelson Mandela, tried to ease his frustration and his Secret Service detail urged him to get into a car and leave.

Carter later agreed to a compromise by which tribal representatives would be brought to him at another location later Wednesday. But the refugee delegates never showed up."