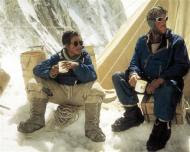 (CNN) -- Sir Edmund Hillary, who gained worldwide fame after he and guide Tenzing Norgay became the first people to reach the summit of Mount Everest, has died, according to New Zealand Prime Minister Helen Clark.

Sir Edmund Hillary took his fame in stride and considered himself just an ordinary beekeeper.

"Sir Ed described himself as an average New Zealander with modest abilities," Clark said. "In reality, he was a colossus. He was an heroic figure who not only 'knocked off' Everest but lived a life of determination, humility and generosity."

On May 29, 1953, Hillary and Tenzing became the first men known to have climbed the 29,035 feet to the top of Everest and safely return.

A beekeeper who served during World War II in the Royal New Zealand Air Force, Hillary began climbing while in high school and traveled to the central Himalayas to join a British party exploring the southern face of Everest in 1951.

He returned in 1953, when he and Tenzing made their ascent -- spending 15-30 minutes at the summit. Hillary left a crucifix at the top of the mountain and Tenzing, in keeping with his Buddhist beliefs, left an offering of food.

Hillary took a picture of Tenzing at the peak but, because the Sherpa guide did not know how to use a camera, there are no pictures of Hillary there.

WELLINGTON, New Zealand (AP) — Sir Edmund Hillary, the unassuming beekeeper who conquered Mount Everest to win renown as one of the 20th century's greatest adventurers, died Friday. He was 88.

The gangling New Zealander devoted much of his life to aiding the mountain people of Nepal and took his fame in stride, preferring to be called Ed and considering himself an "ordinary person with ordinary qualities."

Hillary died at Auckland Hospital about 9 a.m. Friday from a heart attack, said a statement from the Auckland District Health Board. Though ailing in his later years, he remained active.

His life was marked by grand achievements, high adventure, discovery, excitement — but he was especially pround of his decades-long campaign to set up schools and health clinics in Nepal, the homeland of Tenzing Norgay, the mountain guide with whom he stood arm in arm on the summit of Everest on May 29, 1953. Read the rest HERE