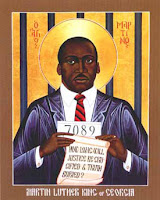 In my blog surfing, I ran across this excellent and challenging article about Jesus and Martin on the "Inward/Outward Blog"

Rev. James W. Lawson, a retired Methodist minister in his 80s now, has been a major figure in faith-based activism in the U.S. One of Martin Luther King, Jr.’s closest colleagues in the Civil Rights movement of the 1960s, Lawson continues to work tirelessly in the tradition of nonviolent activism for social justice. Speaking at a King commemoration recently in Los Angeles, he said something that caught my theological attention.

“If you want to understand King,” Lawson asserted, “you must look at Jesus.” He was acknowledging that King was a committed Christian disciple who understood the call of the gospel as a vocation of advocacy for the oppressed, of love for adversaries and of nonviolent resistance to injustice. King can’t be understood apart from his faith: he organized his movement in church basements, prayed as he picketed, sang gospel hymns in jail, preached to presidents, and challenged other church leaders to join him (most poignantly in his 1963 “Letter from a Birmingham Jail”). But Lawson was saying more than this. He was alluding to the undeniable, if uncomfortable, parallels between the Jesus story and the ministry of Dr. King.

Like King, Jesus was a member of an ethnic community that suffered great discrimination at the hands of a world power. Both of them:

* spent time listening to the pain of the dispossessed and broken among their own people, and advocating on their behalf;
* worked to build popular movements of identity, renewal and
* resistance to injustice;
* proclaimed the vision of God’s “Beloved Community” in ways
* that got them into trouble with both local and national authorities;
* were widely perceived as operating in the biblical prophetic
* tradition by both allies and adversaries;
* animated dramatic public protests resulting in arrest and jail;
* were deemed such a threat to national security that their inner
* circles were infiltrated by government informers; and
* in the end, were killed through an official conspiracy because of their work and witness.

These parallels have been oddly absent from longstanding, abstract theological debates as to whether or not Jesus was a “pacifist,” or whether he was politically engaged, and are thus worth exploring. King not only looked to Jesus; if we want to understand this greatest of figures in the history of social change in the U.S., we must look at Jesus.

It strikes me that the converse also applies, however: If we want to understand Jesus, we would do well to look at King. Read it all HERE.
Posted by Peter Carey on Saturday, January 26, 2008