What would it take?


I have been wondering what it would take for people today to take to the streets to protest the current state of affairs in our country. At lunch today I had an interesting conversation with a colleague who had been in school in the '60s and described the protests that occurred related to the Vietnam War and the struggle for Civil Rights. Today, we have what amounts to a perpetual war in Iraq - and we may be soon at war with Iran. I wonder what it would take for people to finally say that they are fed up? I think that we have, perhaps, done better to work to support our troops - - I hope we are doing better at this task, but we seem to be lacking in leaders who have a level of nuance when it comes to discussing our foreign policy and who might be able to help us to both support our troops, and also seek solutions that won't take decades of occupation in the Middle East.

What would it take for people to take a stand on this issue, and so many others? I am also complicit in this non-action. Feeling relatively comfortable in my present state of economy, I feel the inertia of the status quo keeping me from standing firm with those who are working for justice. I feel the inertia of the status quo that whispers to me that I shouldn't rock the boat, lest I may fall in water. However, perhaps falling in is what is needed. I remember being at Bates College when the first Iraq War broke out in the Winter of 1991, and we took to the streets! And, from this vantage point, that military action looks like it may have fallen within the requirements of a Just War (perhaps). But today, we hear of Waterboarding, of some very strange and scary practices with detainees at Gitmo, the ongoing work of the School of the Americas (School of the Assassins?) to train mercenaries and "security" forces for corrupt regimes. We hear of this, we hear of the actions that our government is taking, yet there is not much criticism of these actions. Why not? What is keeping us glued to our sofas? What is keeping us from turning off American Idol?

I am not sure, but whether you are in full support of our current administration's policies or not, I would love to have a debate about it. I would love to hear some experts and ordinary people go head to head on these issues. I would love to see some Anti-War (and even "pro-war") marches!

What would it take to get people off their fat behinds to step up and stand for something? 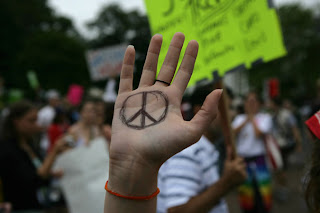 "You've got to stand right up for something, or you're goin' to fall for everything" John Cougar Mellencamp