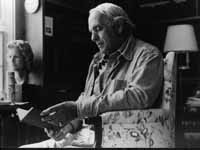 Love and Suffering
Written by admin July 14th, 2007 and posted at Inward/Outward

Love is a key concept in Buddhism and Christianity both. Buddhism, in the long run, seems to come out against it except in the sense of something like upekha, which is a love so vast and passionless, so disembodied and impartial, that it ceases to resemble the Christian form in any very apparent way.

Buddhism comes out against it not just for one’s own sake in the sense that to love another is to open the door into a whole new realm of vulnerability and suffering for oneself, but for the sake of the other also in the sense that unless we can break all the fetters, including love, which bind us to the wheel of rebirth, we can never achieve that Nirvana-like state of selfless detachment which is the only state in which we can be of any real use toward helping others to achieve it.

Bloodless, remote and mythical as these Buddhist insights are apt to seem from a Christian perspective, they are nonetheless greatly useful, I think, in deepening our understanding of love in a Christian sense.

That to love other people is to suffer when they suffer is a truth of life which Christianity recognizes no less than Buddhism does. It is a truth which has much to do, of course, with what the Cross is all about. To say that Christ takes upon himself the sins of the world is to say that he takes upon himself the suffering of the world too. It is to say that in a sense his suffering on the Cross continues for as long as any of us suffers. Furthermore, in being called to take up our own crosses and follow him, we are called to participate in his suffering.

But unlike Buddhism, Christianity nevertheless affirms this love that suffers and, what is more, affirms it not in spite of the fact that it suffers but because of it. It affirms it for the reason that to love others to the point of suffering with them and for them in their own suffering is the only way ultimately to heal them, redeem them, if they are to be redeemed at all.

It is God’s way in Christ, and as we are called to participate with Christ in his suffering, so we are called to be partners with him in his work of redemption. For our own sakes as well as for theirs, we are called to be Christs to all humankind, in other words, and that is close to the heart of our faith and of our lives together as Christians.

And yet. And yet. Having spoken this Christian truth, we must also, I think, remember the Buddhist truth which may be closer to it than at first glance it appears. If love is a matter of holding fast to, and identifying with, and suffering for, the ones we love, it is a matter also of standing back from, of leaving space for, of letting go of. To become, through loving and needing them, as involved in the lives of others as I was involved in the lives of my children is in the long run to risk being both crippled and crippling. Because we love our children as helplessly as we do, they have the power to destroy us. We must not let them, for their own sakes no less than for our own. A distance must be kept - not just from our children but from everyone we love.

I think of the Buddha sitting under his Bo-tree with his eyes closed upon an inner peace which he would not permit even his great compassion to disturb. I think of the staff of the East Harlem Protestant Parish with the pale northern blue of their compassion, their sad gaiety, their utter lack of sentimentality. I think of Jesus himself, who in the profoundest sense bled for people but was never what is meant by ‘a bleeding heart’; who did what he could for the sick and suffering who came his way and then moved on; who wept for Jerusalem but let Jerusalem choose its own way; who kept his own mother at arm’s length and, when Mary Magdalene reached out to embrace him at the end, said, ‘Do not touch me.’

Frederick Buechner has written many books, including The Sacred Journey, The Magnificent Defeat, Telling the Truth, and Now and Then, from which this piece is taken.
Posted by Peter Carey on Friday, January 30, 2009