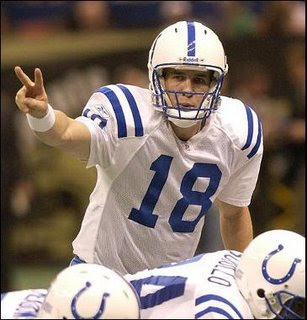 I was bummed that Peyton Manning and the Colts lost yesterday, not so much because I'm a big Colts fan, but I think Manning is really a pretty great person - and a terrific quarterback. I really love his commercials ~ they get me cracking up. The most recent one, in which he counters three insults with a positive attitude, and a response that shows that he is assuming the best (and is not defensive) from these three would-be jerks. On one hand, he appears to be naive that they are even insulting him, but, really he has the last laugh - he isn't going to let their pettiness and insults ruin his day. I couldn't really understand why I love it so much until I realized that it actually reminded me of a Christlike response to some of the insults and arguments in the gospels, and also reminded me a bit of the great ministers and priests who I have known - who assumed the best from people, and even when someone else was having a bad day, and was being rude or insulting, they were able to reflect that rudeness away...I've probably gotten way to deep into what are just some silly and fun ads, so stop reading, and check this one out.

Have a great Sunday!