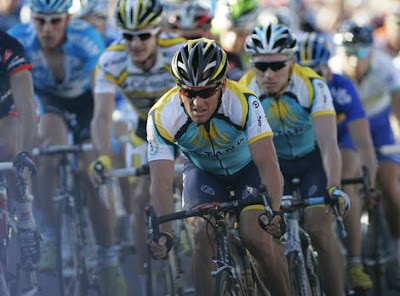 "Back in the saddle … Lance Armstrong at yesterday's criterium in Adelaide." - photo credit: Reuters

of the Sydney Morning Herald

LANCE ARMSTRONG, racing with No.11 on his back, placed a modest 64th from 133 starters in his comeback race, the Cancer Council Classic, in Adelaide last night. But for the seven-time Tour de France champion it was one of the most significant results of his career.

In front of a record crowd estimated by police as being 138,000 strong, it was Robbie McEwen who claimed victory in the 51-kilometre criterium made up of 30 laps of a 1.7km circuit around Rymill Park to give his new Russian Katusha team their first win of the year.

But Armstrong's Astana team manager, Johan Bruyneel, who guided him through his seven Tour wins from 1999 to 2005 before he began his temporary three-year retirement, said: "It is a very special moment. Finally he could put a number back on his back and do a race. Now he is a racer again. He is not a guy who is training for a comeback."

Armstrong, meanwhile, was in high spirits after crossing the finish line in a group of 13 riders 23 seconds behind McEwen, who beat Dutchman Willem Stroetinga of the Milram team, and Sydneysider Graeme Brown, who races for Rabobank, to win the curtain-raiser to the Tour Down Under, which starts tomorrow and finishes after 802km on Sunday afternoon.

Armstrong conceded that the high speed and frenetic style of racing had been difficult but added that the greatest hazard was the blinding sun on one corner as it set at the end of a day where temperatures reached 33 degrees.

"That was fast. The last time I did something that fast a race was probably back in the States in the '90s. It is fun to get back in there," said Armstrong.

"I found it a little bit safer and easier in the back [of the peloton]. In the first 50 or 60 [positions] there was a bit of positioning happening.

"I was a little nervous in the corners. The hardest thing was the sun. On one corner you really had the sun in your eyes. After the sun went down it was all fine. That felt good.

"[But] I have trained a lot for this comeback and this race. I am glad the first day is over and we can now get into the [road] racing.

"It lets me relax a little bit more. There was a lot of anxiety before today."

Armstrong is looking forward to finding his racing legs in the steadier pace of racing on the open roads in the Tour Down Under.

"At that [criterium] tempo it will take a while, but the [road] race stages will slow down significantly and there will be more hills and I can use more power," he said.

"I think I will find it easier to adapt to road racing tempo. [But] it is good for the first day."