Rev. Robert Two Bulls is a "leader in residence" at VTS for the next two weeks. I have met him a couple of times and he is a wonderful priest and leader in our church. In addition, he and his wife were members of the Cathedral Volunteer Service Community a few years before I was. The CVSC was the Internship Community about which I wrote an article for The Episcopal Cafe recently. I am glad that VTS has asked Rev. Two Bulls to campus, and I am sure that those who take the time to meet him will learn from him. 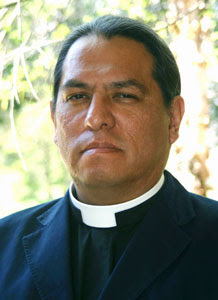 ALEXANDRIA, VA - Virginia Theological Seminary (VTS) welcomes to campus today the Rev. Robert W. Two Bulls as a 2008 Leader in Residence fellow. Two Bulls, an enrolled member of the Oglala Lakota Oyate and resident of the Pine Ridge Reservation in South Dakota, currently serves as Vicar of All Saints Indian Mission and Director of Indian Work for the Diocese of Minnesota.

After receiving his M.Div. in 2000 from General Theological Seminary, Two Bulls served as the curate—then Assistant Rector following ordination in 2001—at The Episcopal Church of St. George in Los Angeles, California. In addition to his work at St. George’s, Two Bulls was named the Missioner for Native Americans in the Diocese of Los Angeles, home to the largest urban Native American Indian population in the United States. In 2003, Two Bulls accepted a call to join the staff of the Rt. Rev. Jon Bruno, bishop of the Diocese of Los Angeles, to begin a full-time ministry as the Program Officer for Native American Ministries.

Two Bulls has served on numerous local, diocesan and national committees within the Episcopal Church and currently sits on the boards of the Executive Council Committee for Indigenous Ministries, the Episcopal Peace Fellowship, the Episcopal Evangelical Society and The Phelps Stokes Foundation. He is also the founder of The Red Shirt Project which promotes cross cultural relationships and understanding between different communities in the Christian context. For the past seven summers, Two Bulls has led journeys with young adults to the Pine Ridge Reservation and is planning an eighth visit this summer.

In addition to being an artist, avid reader and music lover, Two Bulls is married to Ritchie Robertson and has two children, a son (11) and a daughter (8). He will be on campus for the next two weeks.

The Leader in Residence Program is a two-week fellowship offered to clergy and lay leaders of color who reside in the United States and are involved in active ministry. The purpose of the fellowship is to provide a leader, who may not otherwise have an opportunity for a sabbatical or time away from his or her ministries, with a time for rest and reflection.

The Leader in Residence program is made possible through the Racial and Ethnic Diversity Initiative and a grant from the Carpenter Foundation. Virginia Theological Seminary will offer two, two-week fellowships in 2008. For more information, contact the Rev. Joseph M. Constant, director of Ethnic Ministries and Community Life, at (703) 461-1765 or by email at jconstant@vts.edu.

Virginia Theological Seminary, founded in 1823, is the largest of the 11 accredited seminaries of the Episcopal Church. The school prepares men and women, representing all eight of the domestic provinces of the Episcopal Church, as well as students from several different provinces and countries within the Anglican Communion, for service in the Church, both as ordained and lay ministers, and offers a number of professional degree programs and diplomas.